Greetings, it is I: Plundor the Spoiler, ravager of the spaceways and conqueror of Draedus, well I was until that He-person turned up, silly brute, how can one not be interested in money? Ah ha ha ha. 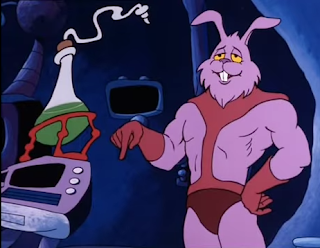 I am told that on your insignificant little planet around this time you like to celebrate death with rabbits, and as the biggest, evilest, pinkest bunny around this is, well, right up my alley. So I have observed your puny world and it’s amusing little distraction ‘the internet’ and plucked from it the finest five long eared ladies you should worship far more than you already do. 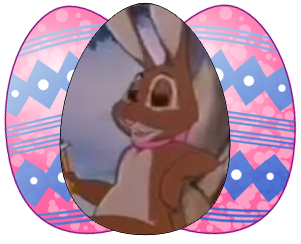 The Cadbury’s Caramel Bunny
Cadbury’s
I discovered this lovely thing flaunting herself for something called ‘Chocolate’, I had no idea what this was but has investigate the amount of money it makes and am now quite the fan, the Caramel Bunny apparently prefers Cadbury’s Caramel bars though I cannot see why as that company’s Dairy Milk clearly outsells it. Regardless of her poor choice in confectionary this attractively voiced siren is a woman after The Spoiler’s own heart, preferring to sit back and let easily swayed sexually frustrated peons do all her work for her. Fran
Final Fantasy XII
While the Spoiler is on the fence as to whether this woman counts as a rabbit, apparently the correct name for her species is ‘Viera’, she is so similar to your planet’s ‘bunny girls’ – who must most certainly be rabbits because otherwise why give them such a name them? – that I shall include her and her bare buttocks in my list. Though she is apparently far more than a set of pretty…ears, a master of weaponry that would rival even I and adept at fighting in high heels, a skill that The Spoiler has yet to fully master, she is also what I believe your culture has dubbed a ‘wrench wench’ and so would do as well, and look as simply delightful, fixing my R.A.B.-Bots as she would leading them. I may have to abduct her right now, well once I have consulted this ‘Game FAQs’ about furthering my campaign on her planet. 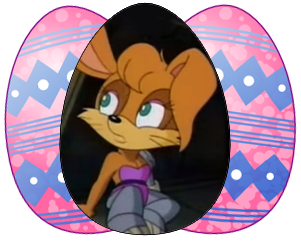 Bunnie Rabbot
Sonic the Hedgehog
I am told by reliable sources, and by reliable sources I mean victims of torture of course, that the usual author of this disgusting ‘blog’ has had a crush on this cyborg siren since he was around six years old, I found this rather odd as he is clearly a human and she is clearly an animated rabbit from another planet…hmmm?...no I haven’t heard of a ‘Furraffinity’… is it some kind of cosmic bunny deity?...GOOGLE SHALL KNOW THE ANSWER!...oh…oooooh….oh ho ho…. a ha ha ha Plundor has found his true home! *ehem* yeeees, I apologise pathetic humans I was momentarily distracted, what was the Spoiler fascinating you with? Ah yes, Bunnie Rabbot, possessor of the southern drawl, mighty ‘rack’ and ‘mad karate skillz’ who assisted the disgustingly heroic blue ‘hedgehog’ thing named Sonic. Dear me, no, look at them, trying to overthrow the rightful conquering dictator of a planet full of animen? What on earth does this blog’s original author see in this woman? 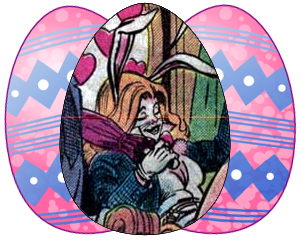 White Rabbit
Spider-Man
Ah yes now this is far more to the Spoiler’s liking, still possessing that Rabbot woman’s mighty ‘rack’ but far more interested in delicious money than over throwing poor warlords like me, um, I mean that Robotnik creature. It seems her luck has not been quite so grand as such a subjugator of the stars as myself, seemingly continuously running afoul of some ridiculously garbed and equally ridiculously named do-gooder ‘Spider-Man’, still she endures in her pursuit of incredible wealth and wearing tiny pants and a J.M. Demattis even tells me that has her own robot rabbit minions, she is perfect for me! We shall pursue wealth in our tiny pants -- together! 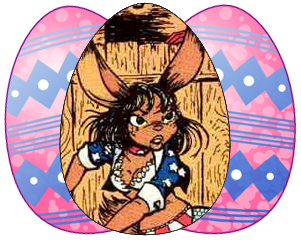 Cutey Bunny
Army Surplus Comix
The spoiler was keen to include the athletic Lola Bunny on his list but found her far too well known, or ‘fapped over’ as I believe you like to say, tittering like the feeble minded creatures you are, and has instead chosen to draw your attention to a far more obscure yet far more delectable athletic rabbit in the form of agent Cutey Bunny. Though she does derive her powers from a bird headed weakling, I am willing to overlook this for her deliciously amusingly parodying, deliciously revealing outfits and delicious lesbian subtext with that Vicky aide of hers, a terrible shame her chronicles only lasted five issues and one (delicious) swimsuit special.

As that Jessica Rabbit woman is clearly lying about her bunny status, you shall leave the Spoiler be now, for he has planets to despoil, Vib-Ribbons to play and White Rabbits to woo and can waste no more time on you, be gone!
Posted by dwitefry at 11:58