I thought for sure there would be some entertainment value in a £1.66 complete set of Space Jam trading cards. I was wrong. Of course I’m still going to wring out a blog post out of it for my new ill-fated idea: Trading Card Theatre. 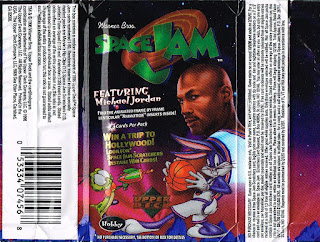 Firstly though, like the Gen13 set I bought from the same seller, these aren’t a completely complete set, they don’t have the special Animotion insert/chase cards and that sucks, because little lenticular images of scenes from Space Jam sounds awesome, but as they sell for $12 each I can maybe see why the couple didn’t put them in their 3 for a fiver box of shitty trading cards under their table. Secondly these cards came out before the film, as well as being a bit presumptuous it severely limits what the card set can include, my favourite type of trading cards for films are the ones that had the whole film in screen grabs so I can read along with the set, hell the Little Shop of Horrors set had more of the film than the film by including cut scenes. Instead this is what we got:

These take up about half the set, they cover all the core cast in their Toon Squad outfits, except Daffy Duck who’s in the armour he temporarily dons while thieving Jordan’s gear from his house mansion castle. I’d question this but come on, it’s completely fitting for Daffy to be doing something completely different for no good reason. The art is really inconsistent, some of them are cells (like Lola and Tweety), others are stock art (like Bugs and Taz) and some look like design work coloured with the fill function on Microsoft Paint. A couple of the human characters get a card to but not all of them – no Billy Murray card here folks, he didn’t sign over his likeness rights – we get Jordan of course, as well as the character played by that bloke from Third Rock from the Sun because all kids want a trading of Dennis Nedry from Jurassic Park (I now have more than one Wayne Knight trading card…) and the other basketball players Charles Barkley, Muggsy Bogues and…that’s it, they don’t even include all the ‘as himself’ players! Shawn Bradley, Patrick Ewing and Larry Johnson apparently didn’t sign the same things that Billy Murray didn’t sign. These cards DO have one saving grace though; in their need to pad out the set absolutely any Looney Tune to get screen time gets cards and that means cards of Swackhammer’s minions, Sniffles the mouse and Witch Hazel:

How cool is it to have a Witch Hazel trading card? Just me? Luddites.

Each of these has a screen shot from the upcoming movie, well mostly - the Nerdlucks transformation scene is art because animation for that scene wasn’t finished by the time these cards went into production, but the theming is actually on the back, each card has a crossword or word search on so kids can deface their cards and ruin their value in years to come – I know right, if some kid had taken Upper Deck’s advice they would be worth even less. I’ve included all the crosswords for you to puzzle over (or you could just rotate the image and see the answers but that would be cheating wouldn’t it? And that would make Bugs Bunny angry and you wouldn't want to piss off Bugs Bunny now would you? Because if Space Jam proves anything it’s that Bugs Bunny is REAL and lives at the centre of the earth).

While Lola Bunny became the breakout stars of the film I really liked the Monstars, I thought they were adorable as the Nerdlucks and great monster designs as the Monstars mixing the looks of the stars they’d taken their skills from with the Looney Tunes and the likes of Big Daddy Roth and Bill Campbell – and basketball players. Each of these cards is just a little introduction to each character with some Microsoft Paint fill colouring from their design work but I feel kind of proud of the little guys for having as many cards and Lola.

Finally we have the only really interesting thing in the set, the cards are just more screen shots but the back of the cards has interesting little behind-the-scenes titbits, did you know:
·          24 drawings are used for each second of animation for every Looney Tune?
·          There were stand-in actors for when the ‘Tunes had to interact with Jordan to aid physical interaction and because Jordan isn’t an actor?
·          The Looney Tunes’ stadium is a 25,000 seater based on the Great Western Forum in LA?
·          Jordan was shot playing Basketball with a ‘wild’ camera and the stadium was animated around him to make things looks more natural and authentic, or as the cards put it ‘asking Michaels to re-create a slam dunk is like asking an artist to re-create a masterpiece’?
·          The artists were asked to recreate the Toon Squad’s locker room because it looked too real?

Well now you do, and you don’t have to own a pile of boring trading cards OR look on IMDB’s trivia section (actually, seriously, go look on Space Jam’s trivia section, it’s long and quite informative and I don’t think any of those facts above are on it) 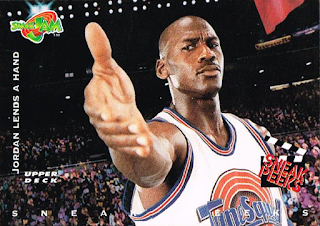