Shred-der I have a new toy out, why hasn’t that idiot dwitefry reviewed it yet? 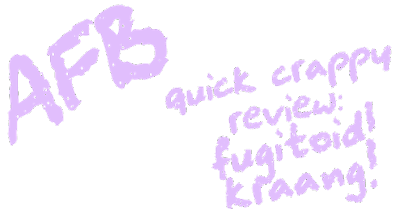 Yeah still haven’t seen Teenage Mutant Ninja Turtles: Out of the Shadows yet and here I am doing a quick crappy review of another toy from it. Both of today’s figures were birthday gifts and it was both delightful and saddening when you consider that I received the same characters on the same day, only about 25 years previous but due to their long tenure with the franchise I have a lot of affection for Fugitoid and Krang so managed to fight down the existential questions raised by that fact. 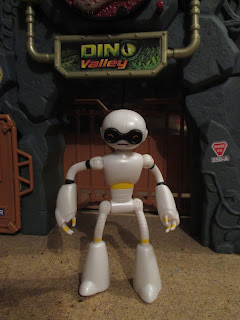 We’ll start with Honeycutt. Professor Honeycutt got into a pickle and ended up a robot (cyborg in the current cartoon) and on the run as not a fugitive but a fugitoid, because he’s an android, geddit? The specifics differ from version to version and Fugitoid has appeared in a lot of different TMNT media, in fact he predates the Ninja Turtles, appearing in Eastman and Laird’s first self-published endeavour Gobbledygook1 before being worked into the TMNT universe in the Mirage comics. While he didn’t appear in the Murakami-Wolf-Swenson cartoon (the old cartoon that was of course better than all the others because you watched it when you were a kid despite it mostly sucking) he did appear in Playmates’ corresponding toyline and – true for all the characters that had major roles in the Mirage comic books – had a major role in the 4Kids cartoon (the early 2000s one) starting with season two and had two toys in that corresponding toyline. Post Viacom buyout he’s been just as significant, appearing as a major supporting character in the IDW comic books and being a main character in the current season of the Nicktoon (Season 4) where he’s voiced by David fucking Tennant and his ship uses a sound affect from Ristar. That’s the version we have here, from Playmates’ Teenage Mutant Ninja Turtles: Dimension X line2, like everything from the current CGI cartoon he’s been pretty retooled: originally Professor Zeyton Honeycutt from D’Hoonib, a planet of scientists, whose body was destroyed by pissed off Triceratons when he refused to build weapons for them, to save his life his robot assistant placed his master’s physical brain into his robot body and now as a ‘fuigitoid’ Honeycutt is on the run from the Triceratons and an ally of the Utroms, the benevolent race The Kraang were once part of. He um, also built the Heart of Darkness, a black hole machine that the Triceratons used to, um, destroy Earth, but he saves the Turtles, April and Casey and took them back in time to undo this, so, um… that’s ok then? 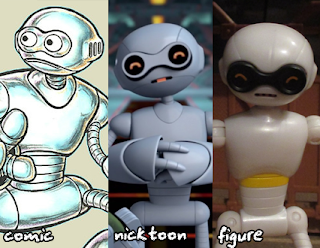 The trouble with this toy is that the best Fugitoid action figure has already been made, the chrome Fugitoid from the 2000s  line was perfect, it was comic and cartoon accurate and vac-metallised; the additional trouble with this toy is that I’ve now found out they’re doing a vac-metallised version as a part of a five-pack ‘Metal Mutants’ set with vac-metallized versions of all the Dimension X Turtles – fuck you Playmates you know how much I like shiny stuff - but I will try and not let these things could my judgement. Mostly I will do this because this Fugitoid toy is pretty damn great, he’s not the right colours or even the right texture, exchanging the show’s smooth but not shiny light grey for a shiny pearlescent white with yellow and black highlights but then the first Fuigitoid figure was bronze and black and I adore that toy so I feel a bit of a hypocrite complaining about it (and none of Playmates TMNT toys are ever the right colours are they? They’ve only just worked out that Donatello isn’t brown). Colour aside this is easily one of the best of Playmate’s current line, his sculpt his spot on and he has a bunch of articulation with a lot of nicely intergrade (though being a robot helps here) he noses lack any artic on his body but he has ball joints at his elbow and hips and swivel joints at his neck, forearms and knees, sure he could have more – I’d like to be able to bend his elbows and knees and I’m pretty sure he has a ball joint at his neck in the show (though don’t quote me on that) but 10 points of articulation is spoiling us for a current TMNT figure and like I say all but the ball joints are so nicely integrated I didn’t know they were there until I started frigging with him while taking pictures for this quick crappy review. So yeah I’m pretty satisfied, of course he has no accessories because Playmates are and remain cheap bastards these days but I suppose you could ask ‘what could he come with?’ my response is “bloody anything, this cost me a tenner”. Also he has his happy eyes and his happy eyes make me have happy eyes, I did entertain the thought that maybe there were multiple versions of the figure with normal, happy and angry eyes but that doesn’t seem to be the case, a bit too creative for modern Playmates I think. 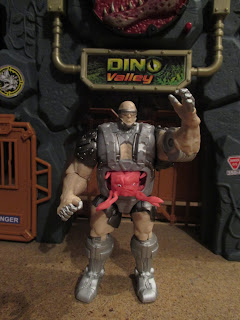 Then there’s Kraang; Krang was created for the original cartoon series and is based on the Utroms from the comic book source material but in that cartoon ISN’T one, in fact his brain-form isn’t his original form (that’s a big muscly lizard-man), he and Shredder were the main antagonists of the show for the first 8 seasons and a recurring antagonist for the last two and I’d go so far as to say Krang’s one of the most recognisable characters in the franchise – though after the Turtles, April in her yellow jumpsuit, Shredder and maybe Bebop & Rocksteady - he’s certainly one of the most well-remembered parts of that era of TMNT. Like everything that wasn’t from the Mirage comic books Krang was banished from the franchise after Peter Laird became sole owner of it and didn’t appear in the 4Kids cartoon or it’s toyline, though Utroms did and the Shredder in that ‘toon was pretty much Krang wearing a Shredder suit anyway (he was an evil Utrom called Ch’rell). Following the Viacom buyout fun was allowed to be had again and Krang has appeared in, now, all three versions of the Teenage Mutant Ninja Turtles currently around – the Nicktoon (as Kraang Prime), the IDW comic books (as General Krang) and now the live action movies as simply Kraang.

The movie version is the version we have here and curiously it’s the most accurate to the original design of the character, in fact I’m actually quite pleased with the way he’s turned out – sure he’s still suffering from the trappings of the design style Michael Bay movies use but it could have been a lot LOT worse – look at every Transformer to ever appear in one of those films if you don’t believe me – and I’m especially pleased with how his head, ‘Krang hole’ and boots have turned out. I haven’t quickly and crappily reviewed any new TMNT movie figures yet (in fact I only bought one from the previous line, Raphael in his trenchcoat and hat) so this can be a little overview of my feelings on them: they have much better and much better detailed sculpts but this is obscured by the minimal paint apps Playmates insist on saving money with, an unintentional bonus of this cheapening out though is that the figures are much more compatible with the regular cartoon tie-in toys than if they were painted properly, their proportions are different but they look far less jarring than say, the original movie figures did when compared to their non-movie peers. Krang himself is kind of a good example of that, without his exo-skeleton you’d never know he was a movie figure – this is not praise – he looks a bit shit really, and mine has really rubbishly painted eyes that make him look like he’s very dizzy, this is a warlord who once destroyed Wingnut & Screwloose’s whole planet just cos and this toy looks like he’s spun ’round on his chair too many times.  Keeping on the theme of bashing the Kraang part of this Kraang figure, I’m pretty sure he’s made of the same rubber the original The Kraang figure was made of, which means it will degrade speedily and all his limbs will fall off if you expose him to sunlight or a light breeze so if you’re going to be putting this on a shelf as an ‘adult collector’, I wouldn’t put it anywhere near a window, or door, or anywhere you might cough. AND the way the Kraang part fits into his body is just… dumb, you have to just stuff him until all of his tentacles are out of sight, why would you do that? Why not just hinge the body? He’s an all new tool, you can do what you like with him – I’m not kidding when I say that The Kraang figures had utroms that fell apart, mind did, I really am not comfortable with just stuffing a thing with leprosy into another thing. If you do choose to do this though he does fit pretty decent with all his tentacles tucked in, I just don’t like the look personally. In an effort to say something nice, the figure’s articulation has a good range and is well chosen, letting the design of the figure dictate what joint should go where, he has a hinge and swivel joint on this right elbow but only a hinge on his left because he clearly only has a hinge design-wise, I appreciate things like this, he also has swivels at his shoulders and hips and hinge-n-swivels at the knees.

Well, I did that quick, in fact I did it so fast I didn’t have time to figure out a conclusion, um… Fugitoid is awesome but I wish I’d waited for the vac-metallized version, not because it’s more accurate but just because it’s shinier, and Kraang’s android body is fantastic but Kraang himself is rubbish and I’m pretty sure doomed to degrade and have all his limbs fall off, I wonder if I can varnish him? 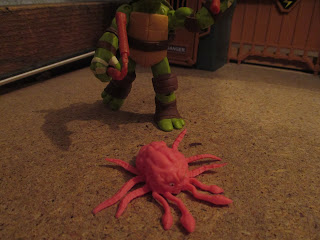 1 This story was never finished in Gobbledygook but was reprinted and completed in Fugitoid #1, the final issue of the original Mirage TMNT Micro-Series.
2 I’m counting figures with ‘Dimension X’ on their packaging as a sub-line, I don’t know if that’s official or not
Posted by dwitefry at 05:48