Pop Culture League: There's A Sale on At Penney's!*

So I deleted my last Pop Culture League post because I hated it and it made me sound like a dick and I don’t think I am a dick (I might be though). Let’s see if I can make myself look like less of a tosser with this one. What’s the topic Cool & Collected? “There’s a sale at Penneys! What was one of your greatest deals?” Oh noooo, this is going to be a bad memory. Also I don’t know what Penneys is, Google is giving me the option of JC Penneys or Primark…ANYway, are you sitting comfortably? Then I’ll begin: 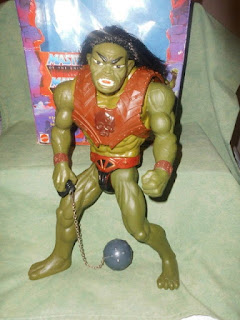 I peaked early, find-wise: I found a Megator in the early ‘90s - only a few years after it was released now I think about it, about six years, just about the right amount for someone to have grown out of it and grown into masturbation and sports cars. Megator is one of the last Masters of the Universe figures released, part of the aborted Powers of Grayskull sub-line (only he and his fellow giant Tytus were released along with some dinosaurs, two more He-Men figures would be released in ’88: Laser Light Skeletor and Laser Sabre He-Man). His harness is currently on sale on eBay for £220 but obviously that’s still there, I saw one sell for £338– so he’d probably go for a couple of hundred at least today, I paid 50p (29 cents approx.). But what makes my Megator buy so good is that I had no earthly idea who the hell he was; Megator came too late to be featured in either the He-Man or She-ra cartoon and I’ve never bought or owned a single carded vintage He-Man figure so even if he was on one of the cardbacks (and I don’t think he was on any non-Powers of Grayskull packaging) I wouldn’t have known of him either. I bought him, well, got my mum to buy him, because he looked cool – he IS cool, he’s a giant green ogre who looks like he’s going to eat your entrails and really hate it because they came out of you and he hates you but he’ll do it anyway and he’ll do it why you’re still alive. I remember vaguely assuming he was from one of those toylines that weer vaguely He-Man/Thundercats scale but went nowhere like Sherriff Solar or Voice Squad (not that I’d’ve known either of those lines’ names back then). Megator strode across the battlefields that I turned my garden into, a lumbering subordinate of evil, regardless of who was the big bad that time (usually Mumm-Ra, Hordak and/or Super Shredder probably). The sad part of this is that Megator is no longer here, I have no idea what became of him, I can only assume he was in the Crash Dummies Box because I wouldn’t have sold him nor thrown him away so his disappearance must have been an accident. This means that I no longer have one of the coolest toys of my childhood and no chance of ever being able to afford a replacement, and frankly a replacement would be nowhere near as cool because he wasn’t bought for 50p at some random bootsale. I do have the Masters of the Universe Classics version who is technically a better figure (it doesn’t have rooted hair for a start, well the extra head does but I don’t use that) and I did get him cheap too thanks to He-Man.org but it’s still not the same, I miss you Megator. I know it says ‘one’ in the topic but I need to cheer myself up – meet Eggasaurus, who was 20p (along with a whole bunch of other stuff including four Fisher-Price Adventure People.). 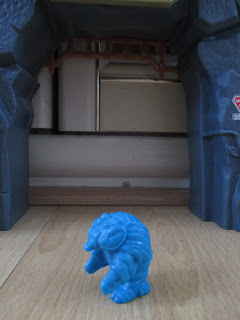 Eggasaurus here is part of a semi-obscure set of mini-figures called Bad Eggz Bunch whom I don’t bother with usually because, well, they’re fucking expensive – going for between 10 and 50 quid and that’s far too much for something that’s less than 2” (insert penis joke here). I have an old Egg Gripper from when they first came out but that’s it. The BEB figures came in eggs filled with slime, being a sequel to the Trash Bag Bunch, who came in dissolvable bags filled with slime – they used to sell ‘em in places like Tesco, so mum would get me one with the odd weekly shop, getting something that came in a slime-filled container with your Fish Fingers and Munch Bunch still seems cool to me. I can’t find a recent Eggasaurs sale, not even on the wonderful littlerubberguys.com but it’s certainly the only thing I’ve ever bought where I could sell it for 100 times what I paid for it! I’m not, going to sell it, the BEB figures are such wonderful sculpts (my particular favourites being Protein Plasm, Bategg, Yolkyuk and the aforementioned Egg Gripper) that I rarely get to enjoy in person thanks to their extortionate bloody value and even though Eggasaurus is one of the more ‘boring’ monsters, and that says a lot for the other figurines when we’re taking about a caricatured triceratops, it’s still worthy of praise, worthy of having and enjoying and it’s a fucking dinosaur – I LIKE dinosaurs.

Whatever Green PlasticSquirt Gun is actually talking about is irrelevant because they have a naked Frankie Stein making out with a naked Gooliope Jellington in the background of their photo
2 Minute Toy Break has a more recent find
Goodwill can be found at Alexis’ Universe
At first I thought Mr Smith’s Plastic Bubble was being an adult, then I saw their second pick
The Nerd Nook has a MUCH better. He-Man story than mine, sob
Posted by dwitefry at 12:00