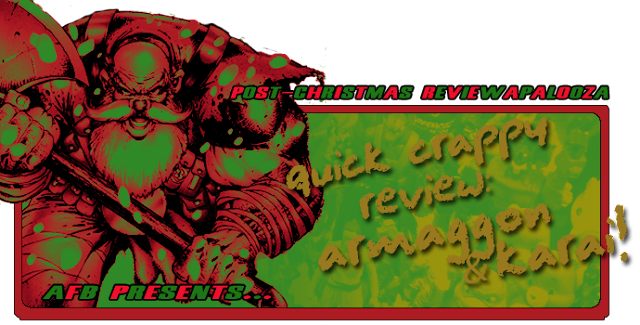 *digs around it the Star Wars bin* oh, I have new, current, TMNT figures to review *sigh*

Figures from Playmates’ current Teenage Mutant Ninja Turtles line (their third to use that name and fifth TMNT line altogether) are one of my favourite things to get, there is a child’s joy in having a new Ninja Turtle toy that never goes away and I am delighted to have both of today’s unwilling subjects: my favourite version of a TMNT staple and the first figure of a villain who originated in my favourite incarnation of the TMNT franchise. BUT they’re my least favourite thing to review because they rarely review well; they’re cheap and nasty and oftentimes lazy feeling and reviewing them just makes me sad at how far Playmates have fallen, from the halcyon days of the vintage TMNT line and Toxic Crusaders to doing shit like these. Even adjusting my expectations accordingly - these aren’t’ collector’s figures and they aren’t aimed at adults - modern TMNT figures review poorly. 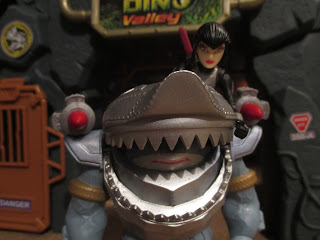 Both figures are from what the Virtual Ninja Turtle Museum is calling series (or wave) 17 of Teenage Mutant Ninja Turtles, this wave also includes Dire Beaver but I haven’t found him yet. I didn’t see them in stores until later November in the UK and trust me I was really looking. These are two of the most anticipated toys to come out this year, at least in my twisted little world. 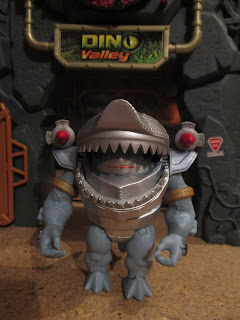 Armaggon can go first. Originally created for the Archie comic book series Teenage Mutant Ninja Turtles Adventures by the book’s writer Stephen Murphy and TMNT co-creator Peter Laird the shark debuted in the book’s spin off Mighty Mutanimals before being a main villain in the fan favourite arc ‘The Future Shark Trilogy’ in Adventures proper. Unsurprisingly he’s a shark from the future, and wants to take over the world (of course!); this version also appeared as a playable character in the Super Nintendo version of TMNT: Tournament Fighters and is the basis for the version who appeared in the more recent multiplatform video game TMNT: Mutants in Manhattan. For the current Nickelodeon cartoon Armaggon is retooled as an alien bounty hunter who’s hired by Lord Dregg, I was going to make a ‘joke’ about the Nicktoon playing really fast and loose with the characters it takes ‘inspiration’ from but I suppose there’s really nothing to say that Armaggon wasn’t an alien or was once a bounty hunter in Archie I suppose. Voiced by Ron fucking Perlman (yes, THAT Ron Perlman, fucking Hellboy) he debuted in the season four episode The Outlaw Armaggon and is currently in the belly of a Scorpinoid, still being eaten by a big beastie didn’t stop Tiger Claw and that Beastie was in another dimension so even though Turtlepedia lists him as deceased I’m not overly convinced. 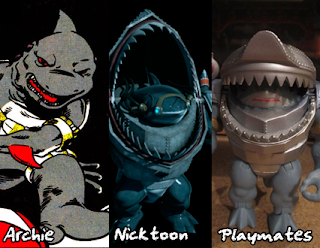 Armaggon’s figure isn’t the right colours, I don’t think they even looked at the character model actually; this isn’t new for Playmates of course – remember General Tragg? – and at least the shark looks like he does in the cartoon otherwise -  remember Napoleon Bonafrog? The sculpt is actually really quite swanky, he’s got loads of veins, little bits of tech and a shitload of rivets that must have driven some poor sculptor mad and almost definitely gave them serious wanker’s cramp. Your lack of self-abuse the night you sculpted Armaggon’s helmet is appreciated mystery sculptor, it’s appreciated greatly. His paint’s trying to be professional but not quite reaching it, it kind of feels like a really talented 13 year old painted him, they’re mostly there but not quite, especially where his helmet meets his head, it’s such a shit job I actually took a special picture of it: 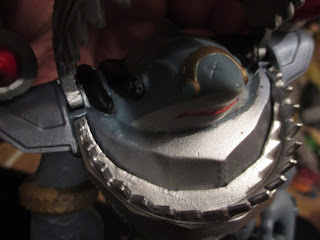 Kids plaster mould kits are painted better than this, well they would be if kids still painted plaster mould kits and didn’t just use drawing apps on tablets, I’m so oooold. Ticking off the third and final essential thing I have to mention every time, Playmates really feel like they’re trying to put more effort into articulating the non-Turtles figures, Armaggon can’t bend his knees or elbows because everyone knows man sharks can’t do that, but he has ball joints at the shoulders and crotch, really satisfyingly chunky hinges at his ankles (so much fun to use) and swivels at his wrists. Plus his awesome wanker’s cramp inducing shark helmet is hinged and thus can chomp, this is also so much fun. I really like fiddling with Armaggon (oh for a better phrasing) -  he’s chunky, he’s fun to pose, he chomps, he’s like a smaller Street Shark and I mean that as a huge compliment, so while he fails two out of the three standard action figure review tests he passes the most important test of all – he’s a cool toy.
He could have passed quicker though, because Armaggon was begging for an action feature – he has two big rocket launchers on his shoulders, they’re right there, they should fire. Playmates are cheap bastards and that’s the nice way of putting it. Speaking of which   Armaggon has no accessories, you’ll need to attach his fin and tail but I refuse to call parts that are detached so he’ll fit in on a standard blister card ‘accessories’ and I doubt anyone would disagree with me (except maybe PR for Playmates, who are all going to hell for being liars). 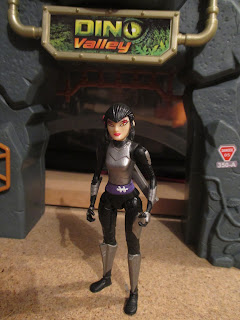 Karai is the last significant TMNT character to come out of the Mirage comic books; she debuted in the 52nd issue of Teenage Mutant Ninja Turtles volume 1 and has turned up in just about every incarnation of the TMNT since, with the exception of Ninja Turtles: The Next Mutation. She was in the Konami video games, the 4Kids cartoon series and it’s corresponding toyline, the TMNT CGI movie, Michael Bay’s cinematic abominations and is currently appearing in both the IDW comic book and the Nicktoon. Her role, being the ‘good’ Foot Clan member and the antidote to the Shredder, is always the same though the specifics of the character differ so much I’m just going to talk about the version we’re reviewing a figure of. Oroku Karai is really Hamato Miwa, the daughter of Hamato Yoshi and his wife Tang Shen who was taken and raised by The Shredder after he killed Shen; Yoshi thought Miwa had also perished in the same fire until 15-odd years later after becoming the mutant rat Splinter and raising four mutant talking turtles. The Nicktoon version of Karai kicks all the arses, she’s sassy, she’s sexy, she’s more than competent in a battle (she’s equal to Leonardo at least), she’s tragic, she’s sympathetic, she’s likable, from her debut episode she became not only my favourite version of Karai but one of my favourite female characters ever.  She debuted in the season one episode ‘New Girl in Town’ and in the season two episode ‘Vengeance is Mine’ Karai was mutated into a snake-person, the first time Karai has ever been a mutant in any iteration of TMNT, and Playmates released a figure of this version shortly afterwards (leading some to suspect that it had been done just to get another mutant for the toyline) but a figure of her in her regular form (she can switch between three forms, regular, half-snake – which got a figure – and all snake, which needs one) we never got, fans made noise, and more noise, and more noise and Playmates finally gave in and gave us what we wanted – booyakasha. I am never saying booyakasha again. 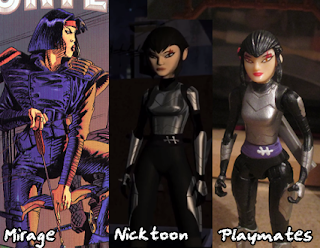 And despite my intro I have very little to complain about even after putting my reviewer’s hat on (it’s soiled and second hand), she doesn’t have any elbow or wrist articulation but then neither do most Star Wars figures and at least she can bend her knees, twist her waist and turn her head, three things Armaggon cannot, in fact she has a ball joint at her neck so she can look up too, something that dogs cannot. So she passes test 1. Paint is not only well applied, sharp and actually in the lines (all but on one shoulder) but rather generous too, everything that should be silver is silver, her logo and make-up is painted in, hell even the handle of her sword is painted, though technically ‘paint’ is where my one complaint for the figure comes up – because they have stamped her product number right across her arse. It looks like she’s wearing one of those skanky tracksuit bottom that have ‘lush’ or ‘posh’ or something banal and vain sowed across the backside of ‘em, don’t make Karai look like a TOWIE star on a me day Playmates, especially as you could have put it literally anywhere else, inside her thigh, on her feet, why stamp it on her arse? She passes test two. Sculpt is usually good on this line and this is no exception, well it kind of is an exception as it’s good by TMNT standards, there’s a bit of rough texture on her right thigh (it catches the light, I wasn’t feeling her up…I wasn’t!) but otherwise she passes test 3 too. Is she a fun toy – she has a sword, and can put it in a holster on her back, yes she is. Huh, fan demand must have a positive effect on Playmates, Muckman’s gonna be amazing then. 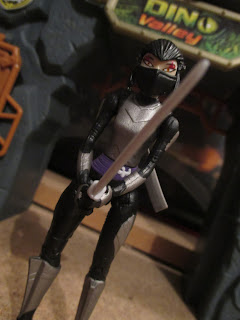 Yeah Karai has an accessory, in fact she has two, and one has paint on it! It’s a sword, I’d’ve liked her to have come with her little short swordy things *looks it up* Tantō, but a sword is still a sword and still cool and hey at least she got a weapon. Her other accessory is her face mask and it’s a piece of shit. Mmm, that’s a little harsh, it does pop on and stay there without her needing any big plug holes by her earholes but it’s really thick and makes her look a bit like a duck, which fits with my earlier accusation that Playmates want Karai to be something of TOWIE, they gave her duck face too, next it’s a tramp stamp and a spray tan. Yes I AM padding out this paragraph. I’m grateful for the accessory, I just think it wasn’t done very well; it’s going into weapons box forever.

Conclusion: TMNT figures today are cheap and nasty, so it’s nice to get one that thoroughly exceeds that expectation in Karai and one that doesn’t but is still fun and likable in Armaggon. I need to go and watch TMNT DVDs now, you need to go back to doing whatever it was you were doing that was important before you stopped to read this (if you existed, anyway), thanks for reading.