Meh, given that this has taken six months, it’s less a spree and more a marathon in multiple parts.

Anyway, welcome to the fourth instalment of Spawn Spree, where I type some meaningless bullshit about six old McFarlane Toys action figures because it seems like the whole world turned against them roughly six months after Neca released their first toys and I often feel totally alone in being a fan of them. Today’s Sensational Seven include Mecha Spawn, Possibly Culturally Insensitive Spawn, Lady Spawn, Spawn’s Boss, a bison and me moaning about how I’m stupid and can’t pronounce a word from one day to the next – tantalizing!
So are you sitting comfortably? Then I’ll begin: 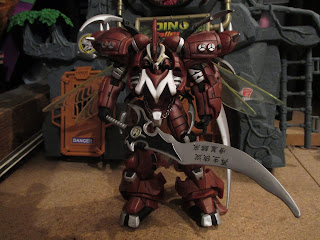 Manga Spawn
Spawn Series 9 (1997)
The Spawn figure that you can own without someone knowing you own a Spawn figure! Manga Spawn’s one of the few Spawn figures that retains a high resale value and could conceivably be called ‘sought after’ and I want to think it’s because it’s the coolest Spawn figure made – Spawn reimagined as a mecha samurai with insect wings – but I’m sure it has as much to do with the continued popularity of anime and the fact that this could slot into anyone’s collection of mech figures, model kits and kinkeshi without anyone batting an eyelid. This is really the best use of McFarlane Toys’ love affair with detail, applying it to mech takes the figure from looking busy to just looking like the inspiration and things like giant blades, spikes and big white Ms on chests work perfectly within the genre, so by doing nothing different they ended up making a Spawn figure that looks nothing like a Spawn figure? Dumb luck? Probably but I like to think someone put some thought into things and was vindicated. I got to use vindicated, correctly, in a Spawn-based post and it wasn’t a pun, I feel proud of myself – very proud. What was I doing? Oh yeah writing a pretty sensible review of this figure, why was I doing that? I bought this with some money I was gifted for Christmas, I bring this up because if Christmas was a Gundam, it would look like Manga Spawn 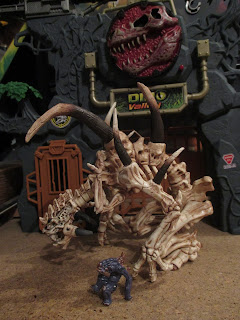 Scourge
Spawn Series 7 (1997)
Scourge’s name pisses me off; firstly I always forget how it’s pronounced (‘skurge’, like ‘dirge’) which is a pain as there was a re-occurring Sonic the Hedgehog antagonist called Scourge too (I am quite foolish) but in this particular case because it doesn’t begin with a ‘v’. The Phlebiac brothers were a concept created by Alan Moore for the Spawn comics, they were Violator’s brothers and all had names beginning with ‘v’: Vandalizer, Victimizer etc. The first Phlebiac brother created for the toy line was Vertebreaker and he had a ‘v’ name so no problems there but Scourge, the second toy-only Phlebiac brother. has a name that begins with ‘s’? Why? Could they really not think of another v word? It’s not like there’s anything about a big bone Violator with a little purple Godzilla in his chest that screams ‘scourge’, Viciouser or Voraciouser could have sufficed – it’s not like it needed to be a real word, Vertebreaker ain’t.
A whole paragraph on a nit-pick? That’s how nerds roll I’m afraid. Aside from that Vourge is awesome, although I think you have be a certain short of person to think ‘big bone monster’ is awesome, of course I AM that sort of person and have the wardrobe and CD collection to prove it and Vourge is fucking metal plus he’s a monster with a littler monster that comes out of him, hopefully you don’t have to own two Black Sabbath albums to appreciate that. 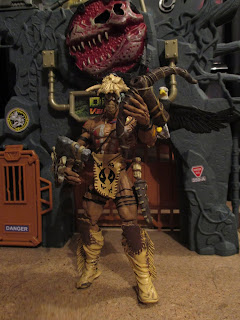 Renegade
Spawn Series 8 (1997)
Fuck this figure. A Native American Spawn makes total sense and the execution of the design came out really well, with the costume and mask achieved with war paint and his naked skin still having that rotting zombie look and skull-like face that Spawns have (though noticeably not burnt to the hamburger-like texture of Al Simmons because he died a different way), it manages to say ‘Spawn’ without even the ‘classic’ costume and is a testament to the adaptability of the Hellspawn design that I banged on about in the previous one of these. But Fuck this figure, why? Because he has 192 accessories and only the dagger stays on. Nothing uses pegs, nothing is moulded correct to fit where it should, the hands can’t hold either weapon (it took a long time to set up this photo), blu-tac doesn’t stick to his skin because of the texture, the eagle overbalances and the helmet has rooted hair and I hate things with rooted hair that come off and lay at the bottom of boxes like dead mice. He is a failure on all fronts. 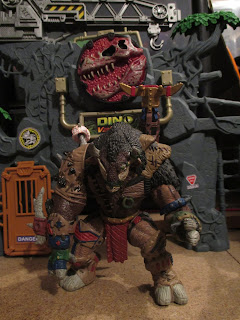 Sabre
Spawn Series 8 (1997)
His nemesis however is a success on all fronts; of course if your starting point is ‘evil buffalo’ it’s a lot harder to fuck up than it is with many other ideas. According to his bio card, Sabre is Renegade’s big villain, his Green Goblin or Lex Luthor, he’s not connected to the hell side of things though (so he’s like Overt-Kill or Cy-Gor for Al Simmons, just more important). I really like that someone bothered to create a whole story for this toy-only Spawn to the point of creating a nemesis for him and giving him a figure. I don’t know what creating play patterns is called when the toyline is for adults, but they’re doing that and I appreciate it, both figures and both characters benefit from the connection and buyers hopefully felt the need to have both to go with each other, success.
Sabre is just made up of big hunks of plastic, even the skull on his shoulder spike is permanently attached and trust me if you have enough experience with Spawn figures you too would see ‘not coming with accessories’ as an upside sometimes. He does have the missile that attaches to his shoulder-mounted gun (because even in the Wild West there was 90’s Superhero design trappings) but that slots into place and stays there (until you fire it obviously). So really he’s the opposite of Renegade, how delightfully apt. 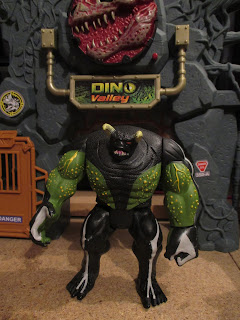 Tremor (2nd Edition)
Spawn Series 1 (1995)
Things were better now I had a black and orange bull cyborg monster thing, they’re even betterer now I have two bull cyborg monster things and one of them is lemon & lime flavoured. I’ve already written 380-something words about this figure when it was orange but by god that’s not going to stop me. I like the first wave of Spawn figures the best – mostly because they’re the crudest and most toy-like, as much as I enjoy a good Adult Collector’s Figure (even though I do still think the name sounds like a collective noun for blow up dolls) they lack a fun feeling that a lot of toys aimed at kids have, or should have as a lot of modern kids-aimed action figures aren’t very fun either – I blame the periphery demographic (i.e me) and the seeming outlawing of action features. Tremor has that fun feeling, he’s a big brussel sprout with a demon face who’s fist shoots out on a pillar of technology, I’m also pretty sure he’s indestructible, a far cry from later McFarlane output that’ll fall apart just by looking at it hard – isn’t that right Renegade? 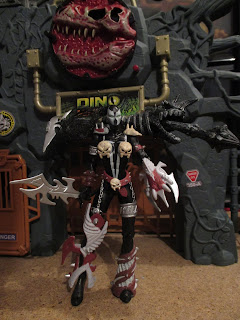 She-Spawn (2nd edition)
Spawn Series 4 (1996)
The lady spawn has garters, she has garters but no tights to hold up, she has hellspawn garters – I’m sure more people are immediately drawn to her skull bra, which given her lore are very likely meant to represent actual angel skulls, as the silliest ‘girl thing’ added to the Spawn design but y’know, those symbiote costumes don’t look like they provide much support so I can just about accept that some additional brazier-like elements might be needed for comfort and practicality and y’know it’s better than just having the figure with skin-tight black goo spread across her naked breasts right? But the garters are just…hellspawn garters, I don’t even, they’re so silly they’re likeable.
Away from this, if you’re doing a figure line filled with Something Spawns than ‘Girl Spawn’ was an inevitability and the outfit suits both sexes well, but instead of a cape she’s given this H. R Gieger-like abstract shoulder mounted weapon thing, I don’t see why the figure designs were so often sans-cape as that always struck me as standard issue for a Spawn, maybe it was cost cutting, maybe they just felt it was a restrictive design element, I dunno. Here it seems to fit the character – who’s a hunter (just like my ex-wife etc etc) so having an abstract killing thing makes more sense (at least to me) than a bright red cape that’d make you stick out like bollocks on a bulldog if you’re trying to sneak up on something (though it never really seemed to matter when Spawn did it, so maybe I’m talking crap). I like the shoulder-thing itself as well, it’s very alien, very much not how humans would construct things which I feel works well for something designed in hell by demons. 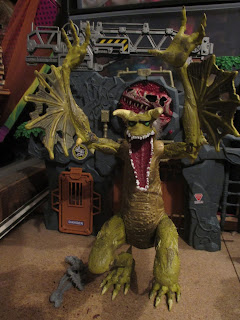 Maleboglia
Spawn Series 2 (1995)
It’s pronounced male-bol-sha, sort of. If you thought your boss was a prick: meet the bastard Spawn works for, he fucks with you just for his own amusement and he’s the lord of the 8th Circle of Hell so naturally I posed him for this picture like he was meeting an old friend at the airport, or having a rave. This is going to sound a little childlike but Malebolgia is the Spawn figure I’ve wanted the longest that it’s taken me the most time to get, the big man doesn’t disappoint, he’s huge for one (he was sold as a regular carded figure), he’s meant to be posed sitting down (as he always was in the comics) but he can stand straight-legged just fine and when he does he towers over even Cy-Gor II, he makes every Raphael figure I own look tiny. And for two he looks like the lord of Muppet hell, I’ve never noticed how Muppety Maleboglia looks in the comics, maybe it’s something that comes with realising the design in 3D?
His body is a different colour to his limbs, this isn’t uncommon in toys but in this case it makes it look like the body is dirty, this isn’t really a downside when it comes to displaying him (it’s not THAT noticeable) it’s a downside if you’re an idiot like myself (the man who can’t remember how to pronounce scourge remember?) and keep forgetting this and then trying to spit shine his body, I suppose I will eventually learn to not to do this, the body is just that colour, but it hasn’t happened yet so once again I’m blaming an inanimate piece of plastic for my failings. To wrap up this section, here’s the Savage Dragon being unable to pronounce this character’s name: 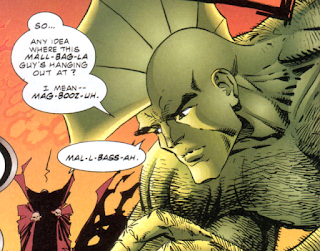 There, I finally completed another Spawn Spree, I feel better – I hope you do too. Anyway here’s the bio cards for Manga Spawn, She-Spawn, Scourge, Renegade and Sabre. Maleboglia’s box was too fucked and the card was ruined, but it only tells you what you I just did: lord of the 8th circle of hell, makes a Spawn army, massive tosser etc: 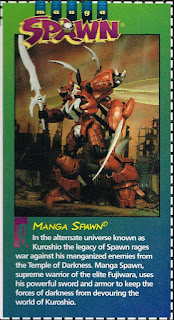 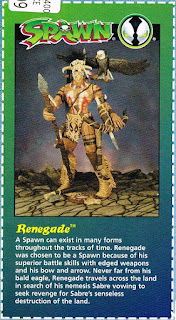 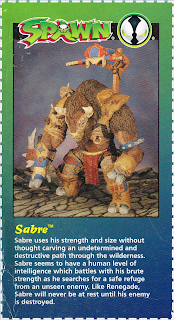 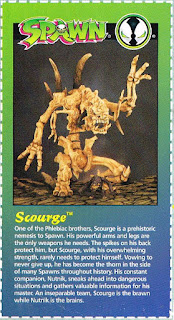 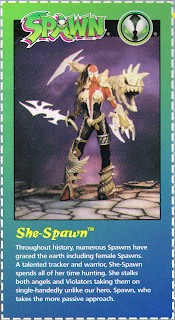