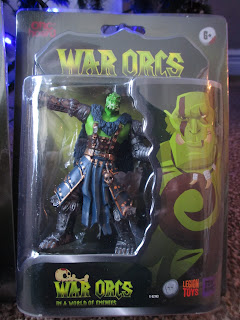 I’ve never talked about WoW on here before because…I don’t play it and never intend to. I enjoyed the film and I liked DC Unlimited’s toyline (and think female Orcs are hot) but that’s about the scope of my World of Warcraft fandom. As such I don’t know the ins and outs of WoW merchandise enough to say for certain these aren’t bootlegs of some previously released toys – I do know they’re not bootlegged from the DC Unlimited or movie lines if that’s any help. But I’m not actually here to be informative today, I’m here to go OMG LITTLE BOOTLEG ORCS! Run around in a circle for a moment and then make them beat up old Action Force figures. Whoever came up with the idea of using Orcs for their cheap shitty toy line was a clever slave labourer because everything that typifies these sort of toys (and is on display here), things like blatant part reuse, misaligned paint, wonk eyes, ugly face sculpts, too-big weapons, limited movement – they’re all totally appropriate for orcs! 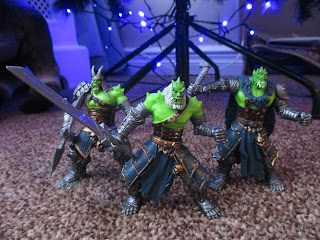 I got these three from Poundland, ruler and overlord of the £1 shops, there’s six ‘to collect’ in total and but these were the only three they had, I’m sad about this – twice the amount of cheap shitty orcs can only be a good thing. The little buggers are surprisingly well articulated with surprisingly well integrated articulation, each has five points – one at the neck, two at the groin and one each somewhere on each arm and they’ve gone to the effort of sinking the joints in below the start of the arm armour – another point towards these being bootlegs I guess, that’s a lot of design for things the company sells for about 1p. Paint is atrociously aligned as one would expect but there’s lots of metallics going on so I really don’t care, it’s probably because of all the lead but I really don’t care – shiny dammit! 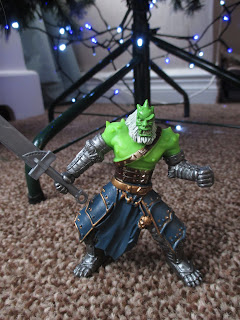 The guy above’s my favourite of the three I got. He’s clearly a chieftain and clearly has fought many battles and gained much EXP in his long, hard life on the battlefield, also he looks deranged and a bit like the Hulk in Future Imperfect (Maestro?). 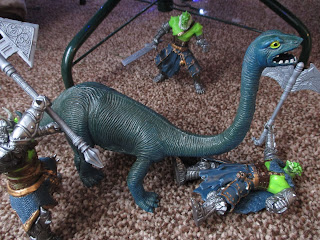 You know what? It’s really comforting how the format for knock-off and bootleg packaging hasn’t altered since the 1980s at least: sure it’s all done with pretty unattractive computer artwork now but it’s still the same: a lot of writing with a rough grasp of the English language and some bold declarations; a logo that looks absolutely nothing like anything else that’s popular at the moment honest; 1 piece of specially designed (or specially stolen) artwork; bullshit claims to having trademarks - I don’t really like change but I understand many things must chance and develop – bootleg toy artwork is not one of these things and I’m glad it’s staying mostly static. Because I’m a lovely human who cares about the world I scanned the packaging art, hence why I’m talking about this here: 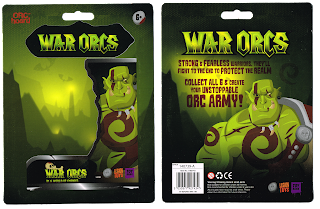 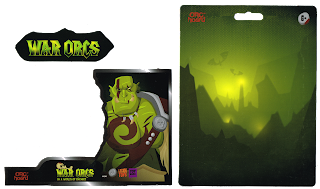 I said somewhere else that if you’re a toy enthusiast it really helps to be easily pleased. People who exclusively collect Hot Toys have to spend hundreds of dollars to get their satisfaction but I’m as satisfied with three £1 Orcs. These will sit in my front room until after Christmas and I will fiddle around with them 100s of times between then and now, all for the cost £3 (well, £4, as I was spending money in Poundland I bought some Twirls, sue me). Don’t get me wrong here, I spend A SHITLOAD per year on collectors’ toys but if you can get enjoyment out of cheap crap, it helps is all I’m saying.

Ooooh! Google-Fu teaches me that ‘Legion Toybox’ is the name for where you store toy-based items in World of Warcraft itself, the Legion Toys Toy Bank is probably a reference! Clever.