I promise you this was an actual piece of art used on an actual retail product and not something I drew when I was 6. Heroes of the World Fighter was a 10-figure cheap action figure line mixed old LJN Advanced Dungeons & Dragons moulds with the odd new piece to approximate a some Teenage Mutant Ninja Turtles figures. This masterpiece was used on the blister cards for all 10 figures.
It’s magnificent
And if you can look past the horrible artwork it’s actually a pretty good approximation of the series 1 Playmates Ninja Turtles cardbacks in both layout and indeed art style (they early cards being hand drawn and coloured ink): 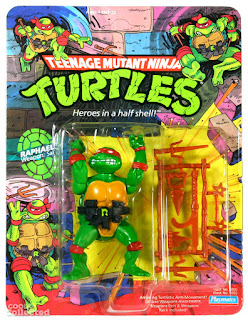 You have the brick background with explosion (the bricks are even roughly the same colours), the three large pictures of a Turtle in the same places (all three poses copied from Leonardo's card art because creativity is hard and even harder when your skills are clearly in something other than art - bricklaying perhaps), the ground with the rocks in roughly the same places. Someone has tried really hard to make this look as close as they could with their limited skills and materials, it looks like what a kid would have drawn at the time for ‘their’ action figure designs, and I can’t promise you that isn’t how it was made.

Some of the highlights: 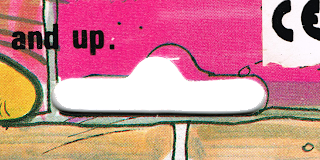 They’ve drawn around a ‘stencil’ (read: the bit that’s punched out) for where the peg hole should be punched – but they got it in the wrong place

The ‘Fighter’ is so misaligned, it’s so charmingly childlike, did they draw this in ink (biro?) straight away? 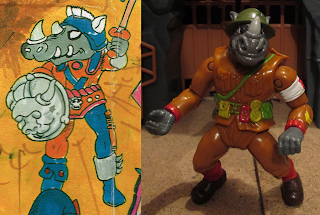 Due to lack of artistic talent, colouring and pieces used to make him ‘Rocksteady’ is actually foreshadowing of his Mutant Military design, no, really. 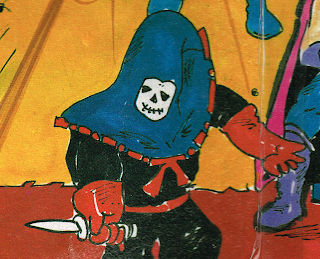 The random Dungeons & Dragons character just thrown in there because they obviously got the moulds for him and couldn’t think of a  Turtles character to line him up with. That’s one of the reasons I’ll argue for this being released in the late 1980s, if it had come out any later than ’89 when the second series figures were on shelves worldwide and more common to see you know they would have drawn Krang’s face on that character. Though I can’t understand why they didn’t paint him Foot Soldier colours and use him to ape that figure. 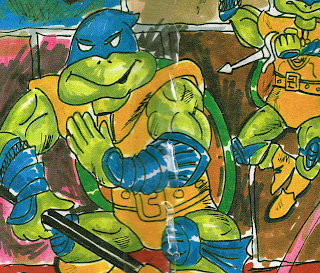 Yep, I sat and spent time making that, love, obsession or madness? It’s a fine line.
Why is that one Leonardo when they’re all Leonardo? Well because two of them have the Turtles’ signature weapons so they’re clearly Mikey and Raph leaving the other two who are both blue bandannaed and both wielding swords – neither ‘Leo’ nor ‘Don’ come with swords in this line of course - so I’m saying that one is Leonardo because that pose is nicked straight from the real Leonardo’s card art whereas the other one is modified:

I’ve been able to put these 10 figures & artwork comparisons into four categories.

The Turtles: Copyright Avoiding. The Turtles are all made the same, original bodies and heads with Elkhorn legs and Zarak arms – this means that technically all the turtles are wearing trousers under their shells, I’ll assume that’s possible. Whoever made these gets some credit for sculpting and tooling original heads for each turtle rather than just using the same one over and over, Rapahel’s came out the best but I like Donny’s because it’s poking it’s tongue out (there’s actually a possible TMNT inspiration for that as the Wacky Action Michaelangelo was also doing that, though I’m iffy if that figure had come out by time Heroes of the World Fighter came out). Regardless ofal that the figures are clearly supposed to be humanoid turtles whereas the card art makes them look like little green men in armour, I assume this is so no one got sued.
Oh and if you care, weapon reuse is: Leo uses Melf’s sword and Northlord’s shield; Donny uses Elkhorn’s shield; Mikey uses Warduke’s shield and Ogre King’s sword (he has the coolest weapons, his weapons are so cool I want to give them to Raphael) and Raph uses Northlord’s shield and Warduke’s sword.

Splinter and April: Original Plans. These two have artwork that is closest to the released figures except for the art having more accessories- noticeably capes. My thinking is this: the artwork is literally Splinter and April’s heads on the bodies of the figures whose bodies they use: Mercion and Melf and those both DO have capes and in the case of Melf he comes with the two accessories you can see Splinter using on the card (a dagger and shielf) that were even in the same colours so my thinking is this: originally the figures WERE going to come with these pieces but costs prohibited it or something similar (the capes on AD&D are fabric, maybe the HotWF company couldn’t produce such things) OR the ‘artist’ was just told ‘draw X figure with X’s head’ and did so.

Rocksteady and Zarak: Wishful thinking. These seem to be just an attempt at making the figure look like what they should do than what they actually do. Looking at the toys there’s been an attempt at making their heads into what the artwork is (subsequently?) trying to depecit them as, Rocksteady’s head is the wrong colour here but his figure is rhino-ish and Zarak’s face COULD be considered skull-like. Rockstaedy’s body is nicked from Warduke and his staff from Ringlerun by the way

Bebop & Shredder: COMPLETE LIES. LIES! LYING DECIEVING PURPOSEFULLY MISLEADING BASTARDS! The figures for these are simply repainted versions of AD&D figures Elkhorn and Strongheart (though Strongheart DOES come with Deeth’s shield, so I suppose that’s something), Strongheart is roughly Shredder coloured but otherwise they look nothing like the artwork and nothing like the characters they’re supposed to ‘be’. The ‘artist’ is flat out lying to us, they have been told to ‘drawn them more Turtles like, fuck it no one will ever know’ and they have done just that the cunts. Ok I suppose it’s possible that there were plans to tool up new heads for these two (most of the other figures have them after all) that looked like the ones pictured but I’m righteous angry dammit don’t ruin it!

I think way too much about things that don’t matter don’t I?


Ah well. Thanks for reading.
Posted by dwitefry at 07:52