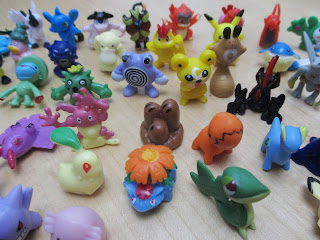 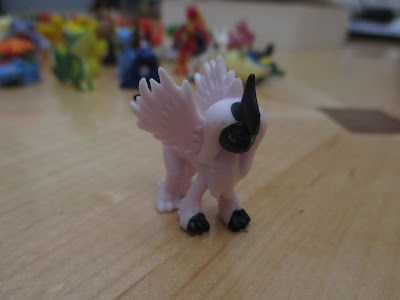 Strawberry Absol!
Oh dear, someone left a red sock in when they washed Mega Absol.
This is perplexing, there are ‘mons in my two bags alone that are brilliant white (and no others with this slight strawberry tint) so the factory was clearly capable of making that colour plastic; thus I’m going to actually say that my initial joke is correct – to a point – Mega Absol is raspberry flavoured because some red accidentally got into the white plastic this time. I like it though, a tint of colour could have helped Mega Absol look even more angelic and it sure does make it look delicious, this could be the first time someone wanted to eat Absol and didn’t mean anything to do with having oral sex with its anthropomorphised form (I had to stretch for that joke, apologies). 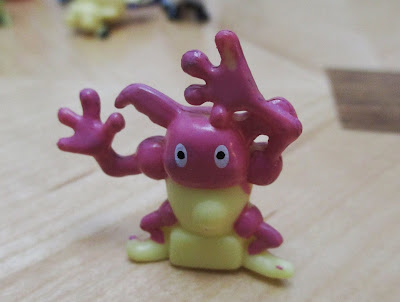 Candy Mr Mime!
A knock-off Mr Mime toy can have a melted Kirby for a head, a huge outey and be squatting on a giant knob of butter and still be less creepy than the real thing.
Good to know? 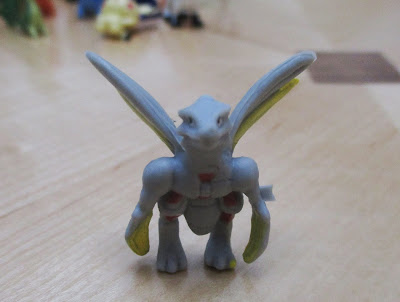 Skarmoryther!
I became a bit fascinated with this bizarre coloured bug. At first I just thought it was a case of whoever made this going ‘fuck it’ and colouring Scyther whatever they wanted; then I thought they might have just got Scyther and Skarmory mixed up – it’s wholly possible, these bags often include things that aren’t even Pokémon; then I decided on it simply being a case of Scyther ending up on the tool with the grey Pokémon – Magnemite, Klinklang etc – because they had room for one more and tools are expensive, especially if you’re selling what comes out of them for a dollar a bag on Wish, but I think there might actually be an explanation for most of this madness above.
It’s a Shiny. Shiny Scyther are lighter and have red where their yellow should be.

I think we can safely presume the unnamed company behind these toys have a Pokémon knowledge that begins and ends with a Google Image Search so it’s completely likely whoever’s job it was to search up what the fuck these Poker Man thing should be coloured like just found a shiny Scyther instead and went with that. Or of course it could just be because Scyther look cool in silver and blood red: 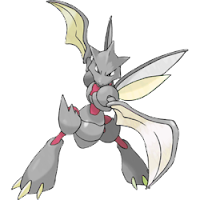 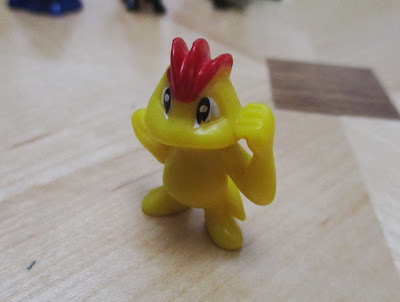 Duckchop!
Fuck knows what happened here though, ooh, let’s ask him
“Fuck?
“What?”
“Why did Machop turn out lemon yellow?”
“Well obviously because the ‘mon’s real colour was too hard to approximate in a slave labour factory in god knows where, being a strange grey-ish turquoise”
“Yeah but they have grey, blue and light green”
“Then you’ve already answered your own question when discussing Scyther, Machop ended up on the yellow tool due to space and money reasons, the Teddyursa figure you got from this set is the same yellow, so that’s a nice bit of evidence pointing to this theory”
“Ok, but why’s his fins red?”
“Oh, because they’re bootleg toys made without any fucks given and painted with the same amount of said fucks! Now leave me alone and make another mock-up, you liked doing that”
“Got it, thanks buddy”
“Bite me”
Lovely bloke that Fuck. 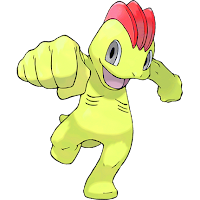 I do like making these mock-ups though, that is true. 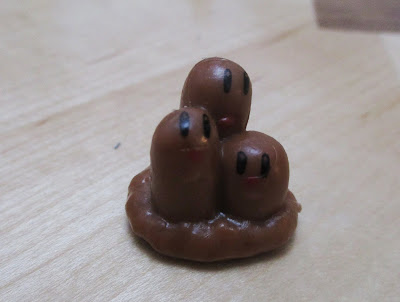 Turdtrio!
“But dwitefry” you whine “don’t Diglett and Dugtrio ALWAYS look like turds?” no, young Padawan, I reply with far more patience than you deserve, they don’t, they look like what they are – Whack-a-moles – or at the worst, cocks with eyes. This is because Game Freak, Nintendo and their licensed merchandisers and third party developers made sure not to pick the exact colour of human faeces to colour them with/cast them in and then made doubly sure not to make the earth around them look like a cow pat. “But dwitefry” there you go again “doesn’t that mean that these are better than the officially licensed Dugtrio toys?” Yes, young Padawan, yes they are – Turdtrios for the win.
Especially that one at the back, who is clearly a cartoon sheet ghost who’s blacked itself up to try and pass itself off as a Turdlett, I’ve got your number ghosty, Dugtrios don’t stretch like that, even when they’re made of poop.
Do you know what else? I guarantee you that this isn’t the only Pokémon that’s been cast in this colour – the whole ‘brown tool’ for these has probably been turned out in this shade of excrement, who knows what other Pookémon sculptures are out there? Ursaring? Fearow? Lopunny? Cubone? God don’t Cubone have it bad enough without being made to look like poo? 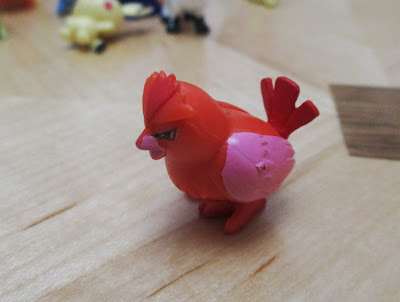 Heinz Pidgey!
Speaking of somehow finding the exact right colour, they managed to find the exact right slightly-orangey-red that all cheap tomato sauces are and then built a Pidgey out of it, a Pokémon with exactly zero red or orange on it. This one has to be a case of mistaken identity, it’s colours are far too close to Spearow’s for it not to be the case. Of course Spearows only have one red thing (well a pair of red things, technically) and those are its wings, that this company have decided to paint Tottenham Cake pink. But you can still see it right?: 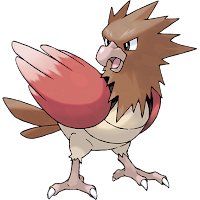 See? Some dirty casual clearly got their common bird Pokémon mixed up, oh well we got a Ketchup Pidgey out of it, so no harm done; this is another one that needs a mock-up I think: 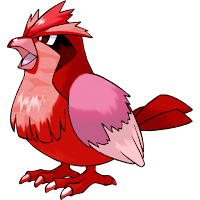 I love bootleg toys, i love that often you can just sort of see the logic hiding somewhere under the lead and choking hazards, because if I had to pick a colour to associate Spearow with, it’d be red – the fact that’s fucking brown is only relevant if you give a shit, and who gives a shit when they’re making bootlegs? 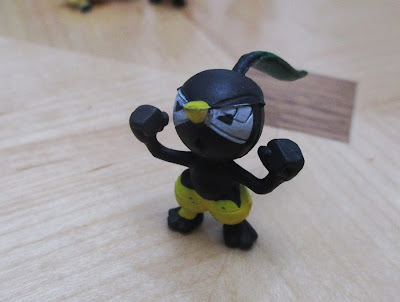 Racism!
There’s no other explanation for this surely? Whoever made these just didn’t know what a Nuzleaf was and though this was some kind of little spear chucking native and coloured it in every shade of 1930s racism. Or they thought it was a penguin, that’s also possible, but given how ok complete racial stereotypes are in the sort of places that make cheap bootlegs and sell them on Wish I’m still leaning more towards Mr Popo than Happy Feet, which may in fact make me slightly racist?
On a more delightful note, the factory didn’t even attempt to line up the eyes with the actual eyes of the figure, making it look like it’s come with its face painted as itself.  What? Oh, alright: 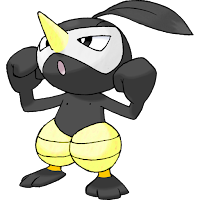 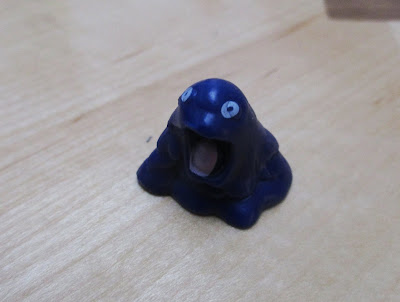 Grimer!
No joke or anything here, I just think Grimer looks damn good in that midnight blue/purple/Wispa wrapper shade they cast him in. 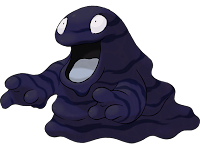 Not quite as fancy as rainbows but still damn stylin’ 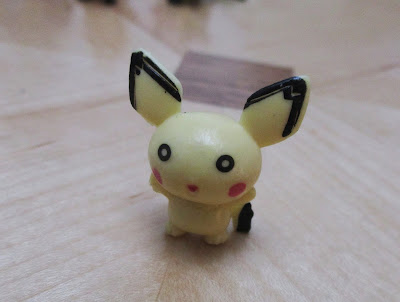 Mimikyu?
It’s not just me right? There’s something deeply unsettling about the face of this Pichu, right? I’m trying to think of a way to describe it and all I can come up with is ‘the face of a ghost appearing around an anus’ but I’ve already done a bunch of ghost and poo related jokes in the Dugtrio section so I’m not sure how funny that’s going to be. Whatever it is the whole face is just… off and it upsets me.
It also looks like Pichu is made out of halloumi; it looks like that in real life too. It’s very hard not to fry Pichu.

I’m not leaving you with that face, so instead, as we’ve made fun of a load of these mini-figures, he’s a shot of some of the good ones: 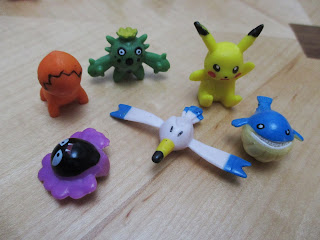 That Pikachu is better than some official merch, and I’ve just noticed its waving, aww hi Pikachu! I bought your version of Let’s Go! The Gastly won’t stand up, but as if to make up for it, Cacnea can stand up two different ways: 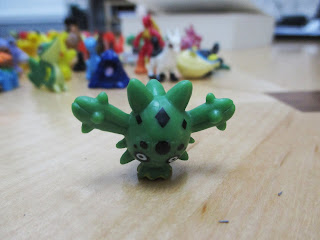 Bootleg Cacnea’s gonna fucking ace my toys’ breakdancing competition this year, the Egg Monsters are gonna be running scared.
I don’t want me poking fun to give the wrong idea, I do genuinely, unironically love the weirdness that are bootleg and knock-off toys and so thank you to Razzie and Dave for these bags of fascination and fun and thank you my imaginary readers for reading this, Happy New Year (I’m only 7 days late).
Posted by dwitefry at 10:40