This is the quickest post I'll probably ever make on this blog but it IS useful so hopefully I'll be forgiven for it when I die. I’ll try and bulk it out with bullshit?

In my spare time (which I have a lot of) I make ‘indexes’ for my own personal use, these ‘indexes’ contain pictures and names of everything in one toy line (and sometimes other things, like a book series, card series or video game library), I think I posted a very small one on here once, some Sungold line or another. Today I finally managed to complete an Index I’ve been trying to build for aaaages now, one for Satyr Masters From Abyss. So I’m sharing it, here it is: 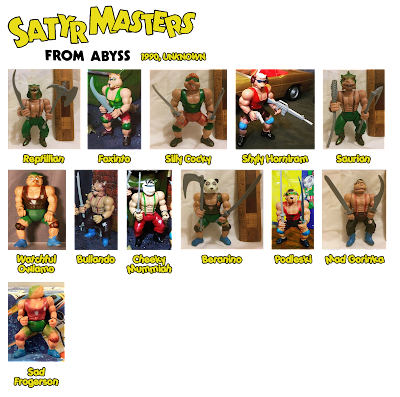 No I can’t explain the name, they could be satyrs who are masters from a place called Abyss (or THE abyss), masters of satyrs from a place called Abyss (or THE abyss), a team called Satyr Masters from a place called Abyss (or THE abyss) or who knows what, it’s what happens when you let non-native English speakers try to ape a long and bizarre title like Teenage Mutant Ninja Turtles.  Satyr Masters have gained a small cult following online, mostly because they have characters who have names with ‘cock’ and ‘horny’ in them, of course I’m not joking, you’ve heard of Ugandan Knuckles right? There does not have to be a deep reason for something getting a following online.
These came out in 1990 though we still don’t know the manufacturer for them, which is odd – while their influence is painfully obvious they’re nowhere near close enough to infringe on any copyrights (like, say, Turly Gang, Turtle Fighters or New Style Ninja Tortoise) so there’s no reason for the company to leave their names off the product. What we do know is that they share bodies with Amicable Herculean, another line that gained popularity online because of its silly name (and was also used to rip off the TMNT) and three Satyrs (Reptillian, Saurian and Bullando) reuse heads from Galaxy Heroes, one of the many ‘Galaxy’ toylines who all knock-off one another and all stem from Sungold’s Galaxy Warriors.
It’s also worth noting that the Satyr Masters were later released on Galaxy Heroes style bodies, these haven’t been included in my index because I believe them to be bootlegs, it’s also worth noting that sharing parts isn’t necessarily an indication that two toylines were produced by the same company in this wacky world of knock-off action figure but as we don’t know the company behind Amicable Herculean or Galaxy Heroes it’s a moot point anyway.

You know what? In order to bulk this post out, I’m gonna post some other indexes for some other smaller knock-off and bootleg lines, fuck it. Click all the indexes here to enlarge 'em (and be able to read 'em).

Amicable Herculean
The aforementioned Amicable Herculean which roughly means ‘friendly strong’ by the way and is made up of a bunch of people who are decidedly NOT friendly, as well as sharing their bodies with Satyr Masters of the Abyss their third wave reuse heads and bodies from another line, and a mysterious one at that, The Devil Warriors. The characters have no names. 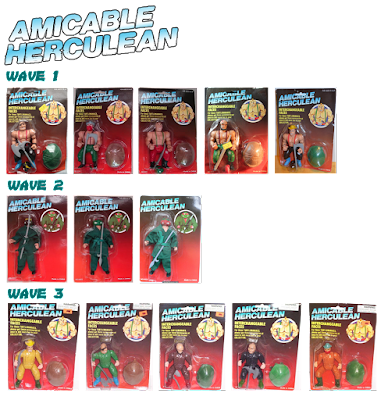 Heroes de la Galaxia
Made by Spanish firm Meipy, these are unusual in the wacky world of knock-off action figures in that they’re closer in scale and style to Yolanda’s output than Mattel’s Masters of the Universe –which they’re of course aping shamefully, they’re solid rubber and around 4-inches each. Fun fact, the back of the cards for these gave each character a ‘sub-title’ like the MOTU figures used to (‘Most Powerful Man in the Universe’ ‘Lord of Destruction’ etc) Zarkan’s ‘Hero of the Stars’; Leoman’s is ‘The Liberator’; Serpidor’s is ‘Prince of Darkness’; Andror’s is ‘Servant of the Dark Empire’; Tara’s is ‘Queen of the Zarka Warriors’; Volcam’s is ‘The Destroyer’; Icaron’s is ‘The Hawk Man’ and Gladiator’s is ‘Mercenary of the Cobra Sands’. Also giving their Totally-Not-Skeletor figure an Egyptian theme is genius when it comes to making a character that’s similar just different enough, good job. The name just translates to Heroes of the Galaxy. 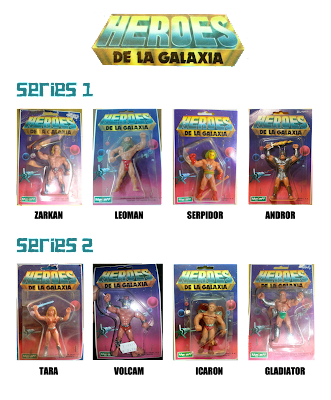 Heroes of the World Fighter
I’ve enthused about these beautiful creatures before, they use old moulds from LJN’s Advanced Dungeons & Dragons toyline and the occasional new piece to make a TMNT knock-off, not only is this ingenious but it guarantees the figures a much better level of sculpt quality than your average knock-off line of this era (the early 90s). The figures are unnamed but in case you’re curious they reuse parts from: Elkhorn & Zarak (the ‘TMNT’), Melf (‘Splinter’), Mercion (‘April’), Strongheart (‘Shredder’), Elkhorn (err… ‘Elkhorn’, it’s supposed to be Bebop according to the card art), Warduke (‘Rocksteady’) and Zarak (Zarak, no, really, they just threw him in, I suppose you could argue he was a stand in for the Foot Soldier, as that’s the only wave 1 TMNT figure not representing in ‘World Fighter?). Notable is that these characters are all from the first wave of AD&D figures (Kelek, Ringlerun, Northlord, The Oge King and Young Male Titan were the rest of that wave, just fyi). 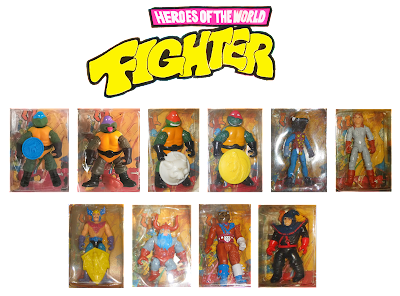 Monsters of the Galaxy
A particularly high-quality He-Man knock-off line from Camy, mostly because they use molds (or perhaps recasts) from Blackstar (body parts) and Masters of the Universe (weapons) proper. Most site put these as 1980s toys (hence me doing so on this index) but they must have come out pretty late (89-ish) if that’s true because the Atrox-Beast is rocking Scareglow’s halberd and the Ghost of Skeletor didn’t come out til ’87. 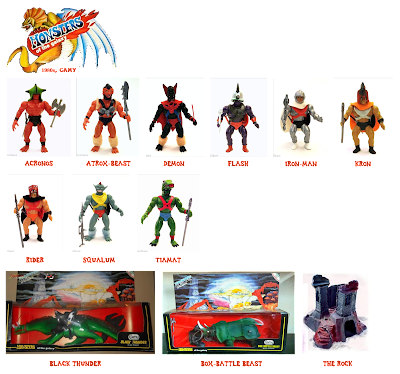 Super Dinosaurs & Super Dino Monsters
These came out in the early ‘90s and were an integral part of my childhood play, they’re all completely unlicensed figures of various Ultra Kaiju (the enemies of Ultraman) and are a type of hollow rubber figure technically called ‘Vinyl’  in Japan but think ‘sturdy dog toys’ if you’re never experienced them in person. I bought them all from a cheap shop in my local high street (which is set around a roundabout) who had them outside his shop in big baskets, every time I handle one I hear the sound of cars zooming past. The larger Super Dinosaurs are about 6-inch scale and came with tags that named them (their names are just rough English versions of the actual characters’ names, whoever made these had NO fear of reprisals from Toho so we’ll assume it was the Yakuza) while the smaller (about 4-inch) Super Dino Monsters were sold from a display box and are officially nameles, even the one that is clearly Bemstar. Sadly I don’t know enough about Ultra Kaiju to name all the Super Dinos for you, but I do know that Gozira was a reused Godzilla costume with a different mask. 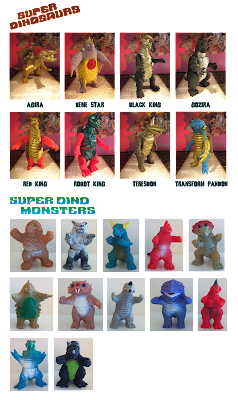 Wrestler
Sungold were one of many random companies who figured out that you could make your He-Man knock-offs into WWF knock-offs simply by taking their armour off. Using the incredibly generic name ‘Wrestler’ the people behind Galaxy Warriors and Monster (because 'Monster' is WAY less generic), two of the greatest action figure lines ever I’d like to remind you, released one wave of figures in the 1980s when Hulkamania was running wild (brother) and then another in the early 90s clearly inspired by the popularity of the Ultimate Warrior (who does NOT appear on the card art and is mostly certainly NOT stretching out one of Demolition). The figures reuse Galaxy Warrior bodies and heads (from Triton, Rahh and Baltard) plus a head from Action Captain (the Swatzenegger-like head that was the only new head tooled for that line) but the other pack-in figures for the wrestling ring appear to use new heads, I personally think it’s damn weird that they’d pack the original figures in with the ring and sell the reuse figures on single cards. 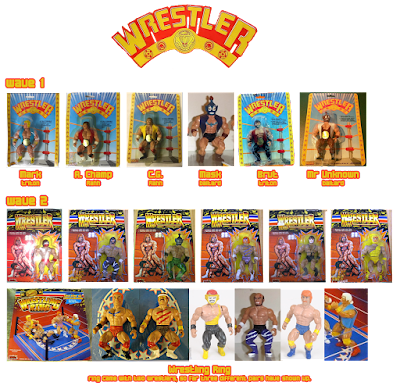 Unsurprisingly given i didn't mean to write this much I don't have a good way of signing off, so. um, ta-tah!