I'll try and pad this out enough to make this worth existing.

My dad is moving house (again) and it turns out he had some boxes of my crap in his garage. I had completely forgotten about this but he turned up with them and left them in my hall. They were dusty, dirty and one of them was filled with broken speakers that I'm certain were neither mine nor his but I found some cool shit, the reason for this post was amongst them:


This is a random postcard for the late Never Never Land at my beloved Southend-on-Sea which I have got all nostalgic and wistful about at least once before but the gist for those who didn't live in Essex in the late 80s and early 90s is that it was basically the British equivalent of a roadside attraction, a small area on Southend's seafront opposite it's pleasure beach Peter Pan's Playground (now Adventure Island) where you walked around various fibreglass creatures and small buildings with animatronics and had an atmopshere like you'd walked into a pocket dimension. I miss it.

I managed to find this in that gift shop that's right at the other end of the front, near the Sea Life Centre, you know the one I mean right? I thought I'd lost it, turns out it was stuck to the inside of a box in my dad's garage for god knows how long. Pictures of Never Never Land, especially this second incarnation, the one I went to, are so hard to come by so I was keen to put it up online. And this one has two non-mice funny animals AND Humpty Dumpty, I'm also pretty sure that the bird with it's mouth open was a bin. I don't have anything else to say other than I honestly cannot prove that the child in the picture isn't me, really, I looked just like that as a small child right down to the habit of never having trousers on, the point of this is solely to make sure this is online.

So, um, oh I know, I scanned some other stuff at the same time (before realising that my scanner was being... difficult), they're not related to Southend but they probably could do with being online so, click to enlarge: 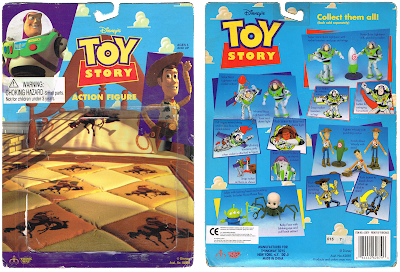 Complete card-ard for the first wave of Thinkway Toys' Toy Story, specifically the Rocket Action Buzz Lightyear. Toy Story 4 was really enjoyable by the way, not as good at 1 or 3 but better than 2 IMO 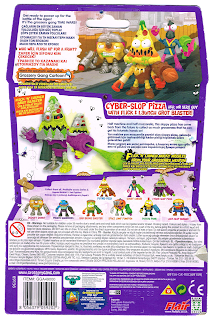 Cardback for the first wave of Grossery Gang: Time Wars action figures, I managed to balls up the scan for wave 3 because I'm basically a chimp with apposable thumbs. 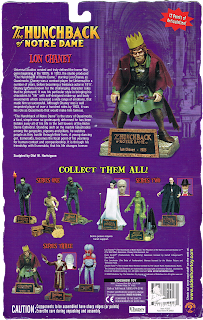 Cardback for Sideshow Toys third wave of Universal Studios Monsters figures, still one of the greatest toylines ever produced. This one was (obviously) for Lon Chaney as Quasi Modo. 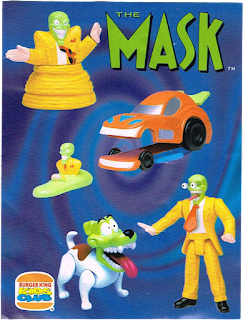 Insert for Burger King's set of promotional toys for The Mask: The Animated Series, of which I own a complete set becasue of course I dedicated time to finding toys from an animated series I don't like (I do like the movie and original comic books though, hence the time dedicating). This has been sitting in a pile in my house since that Birmingham Toy Fair from October last year. 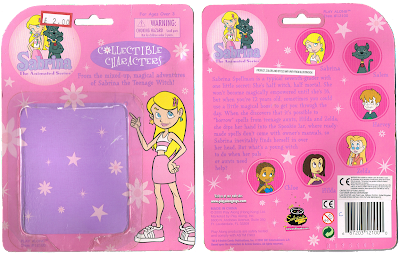 And finally a complete scan of the card for the Sabrina: The Animated Series Collectible Characters because no-one else will ever scan or upload this, remember?

Ok, NOW I feel better about the amount of cotent in this blog post, I can die happy, and by die I mean 'go and watch Elvira: Mistress of the Dark' and by happy I mean 'still miserable as sin but feeling like I've accomplished something today'. Ta, all.
Posted by dwitefry at 11:28