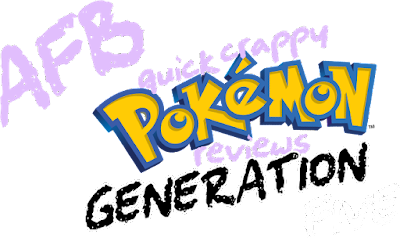 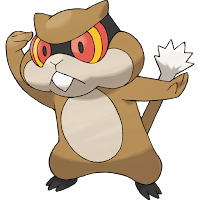 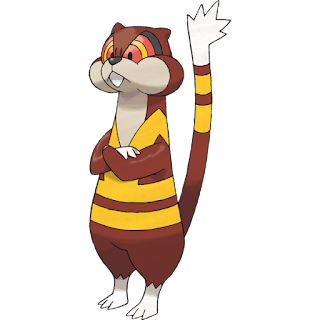 Patrat is average and I hate Watchog completely.
The end.
Okay, okay.
So Patrat doesn’t do anything particularly wrong, I like that its tail is standing to attention, good little design feature, and the line as a whole is very good to use in battle for one of the ‘common rodent’ Pokémon, as anyone trying to Nuzlocke Black and White will know, Watchog can go fuck itself as an opponent - in fact it ended up being the new Zubat more than Woobat ever did – but those sort of ‘mons are great when they’re on your team. Speaking of Watchog and going fucking itself, Watchog can go fuck itself in every other way also. I hate everything about it, it hate it’s Looney Tunes face (and I like the Looney Tunes!), I hate the ‘slapped on’ look of its yellow markings, I hate the colours scheme and if it had shoes those’d piss me off too. “But it’s wearing a hi-vis jacket you say” or maybe “its supposed to look like a traffic cone! Those yellow markings aren’t ‘slapped on”; no I know they’re not, but they look slapped on, and that’s a flaw with a design if you ask me. They could just have easily joined them up to its muzzle and made it look a million times better – or better yet, made the whole damn thing high-vis! (I have literally just thought of this) make the whole Watchog luminous except for the stripes, Patrat’s even a light colour so it transitioning into a neon meerkat would have felt MORE natural than turning into a hamburger coloured one with slapped on feeling markings. 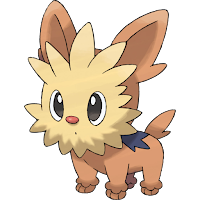 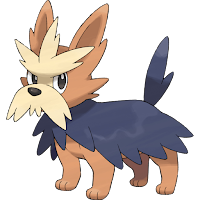 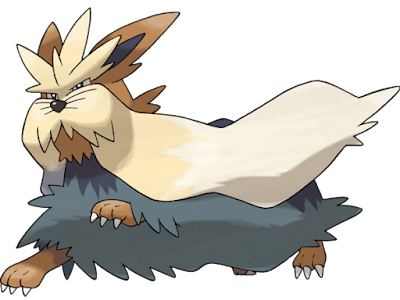 Am I missing something? This line is based on Yorkies right? Yorkshire Terriers? Yorkshire, as in Yorkshire? For a region based on America? A country where over half the population can’t even pronounce Yorkshire (York-shy-er my arse)? Are Yorkies really big in America and I just never knew this?
Lillipup’s design has always bothered me just a little bit, I think I’ve narrowed this down it’s face fuzz, that cream fur looks really… separate, like it’s been glued on, like a fake moustache if you will and how appropriate is that because moustaches MAKE the rest of this line. If it wasn’t for Herdier’s neatly designed (and I assume, neatly groomed – every day) facial hair it would be just a drawing of a dog, wouldn’t it? which is quite odd given that it was designed by the annoyingly attractive Mana Ibe, who also created the likes of Victini, Jellicent, Kelfki and Haxorus, all of which most certainly cannot be summed up us ‘just a drawing of X’, perhaps that’s why Herdier does have that extra element of design going on it’s mush, perhaps Ibe is just the sort of designer who can elevate ‘just a drawing of a dog’ by doing something so simple? Or perhaps I’m just saying this because I quite fancy her and she designed the almighty Stunfisk. There’s a lot of personality going on with Herdier too, he sure looks like the firm but fair general of the Pokémon world, but then Ibe also designed Stunfisk, who is 100% personality, so that’s defiantly part of her skill set.
And it all adds up to the most glorious moustache in the Pokémon world, Stoutland, the grand old duke of Pokémon, a dog and with facial hair that breeds only respect. Though I don’t think Sugimori’s current art for it does it justice, so I’ve included this ride-on Stoutland render get the full effect across, please ignore the pink saddle, it only wears it to please it’s human pets: 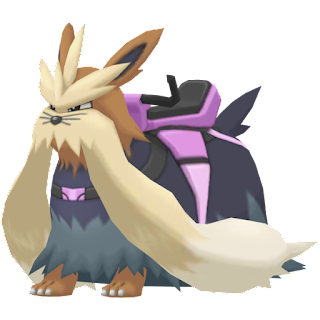 That is a dog with goddamn presence (and size, a normal person can ride on the bastard), if I could be a Pokémon I’d be a Stoutland just because for once I’d be as manly as I’ve always want to be. 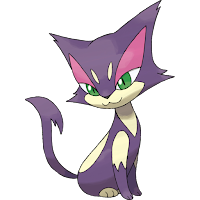 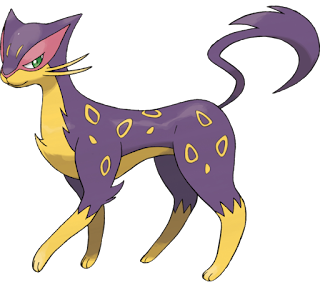 It’s the Gen 5 equivalents to Meowth and Persian, a house cat that evolves into a jungle cat and Liepard’s markings bother me of course, they have that just drawn on anywhere then knocked off for a wank in the toilets that bugs me so much I bring it up all the time. I don’t know why it bugs me so much, I mean it bothers me because I think it looks crap and I bring it up because I’m reviewing them but I don’t know why it’ SUCH a big thing that it guarantees a terrible score to whoever has this issue that I’m sure other people can’t see, maybe it’s because I know the team are capable of better? Anyway the rest of Liepard doesn’t do too much for me anyway, I like it’s silhouette, it’s overall shape but it’s colour are gross, that’s just the wrong colour of yellow for me, it’s the colour of gross, of cheap European cakes and drunks’ vomit. Still it does look like it evolves from Purrloin so if you’re not bothered by shit markings and horrible yellows and like liked Purrloin you’d find Liepard a suitable finale to training your Purrloin. I don’t mind Purloin, I like how it’s markings make it look like a space alien or a Power Ranger (why not both?) and as a feminine counterpart to the very masculine feeling Meowth it’s ok, and is hadn’t got any puke yellow on it, just pleasing pink. 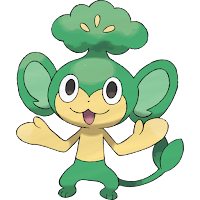 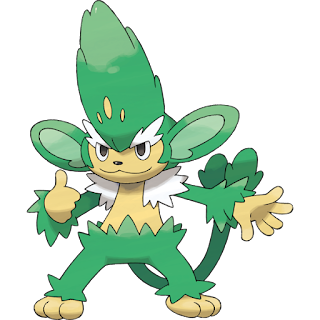 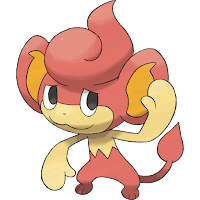 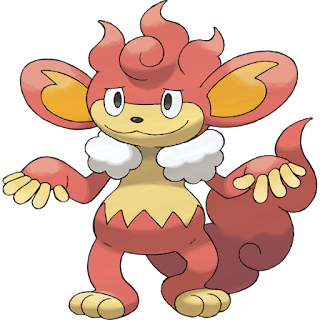 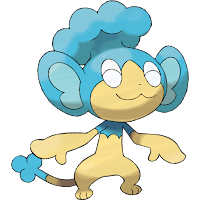 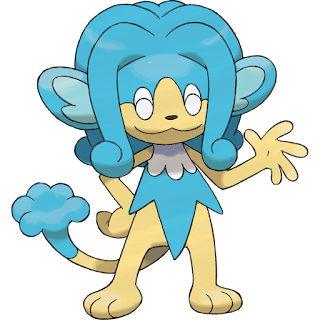 Unlike just about the whole Pokémon fandom I don’t hate the Elemental Monkeys, but mostly because I don’t care about the Elemental Monkeys, 2/3 of this sextet just cause nothing but apathy – which is probably worse really, surely it’s better to create a strong reaction than none at all? I like the idea the Elemental Monkeys were used for, basically you’re given a ‘second starter’ to help you out, one that’s the opposite Type to the one you picked initially (so if you picked Tepig you get Panpour, very few received Panpour), that’s a fine idea, a nice way to help newer or less competent players that others can ignore just by sticking the thing in a box, and a completely new concept for Generation V but, like the all-original Pokedex, the idea doesn’t reach it’s potential in the execution - because the execution is a bunch of unremarkable element + animal = Pokémon designs
The first stages of the three lines – Pansage (Grass), Pansear (Fire) and Panpour (Water) – all leave me completely meh, I would have added some kind of pattern to Pansage’s stomach where the brown meets green similar to its siblings’ but otherwise they’re completely functional cartoon monkeys that pale in comparison to the likes of Mankey and Primape’s more original execution of the idea and veer far too close to being palette swap characters, still at least they have different tails and that’s alone puts them above the Lake Guardians. If I had to pick a favourite I’d probably go with Pansear because I like it’s hair because it’s come to that.
Their evolutions add a bit more individuality and personality – while keeping the same face and ear markings, something I have just this second noticed, have a look, it’s true. This allows me to get a bit of a stronger opinion them, well except Simisear, Simisear is just there, looking a bit goofy and like it’s wearing fingerless gloves, but doing nothing to offend or delight me. Actually on that, have you ever noticed that Simisage (Grass), Simisear (Fire) and Simipour (Water) look like they’re wearing little clothes? Simisage and Simisear have jackets and Simipour has a little swimsuit, it’s cute. Oh yeah, those stronger opinions; I actually really quite like Simisage as a design, I like it’s ridiculous anime hair that yet still looks like a tree (and not broccoli), the spikey bush-like feel to it’s fur and it’s convincingly cool dude swagger, it’s a cool monkey. I actually rather dislike Simipour, something about the design seems really bitty and stuck together, I dislike it’s hair which looks like Play-Doh and doesn’t really seem to connect to it’s prevolution’s (which had a splash for hair), it’s swimsuit fur seems to finish too far up its body to work for me (and is FAR too revealing, cover yourself up monkey!) but I do like that its tail looks like a cartoon squirt of water coming out of a hose, that’s cool.
So yeah, sorry all, no hate for the monkeys, just mostly apathy and bitchiness about hairstyles 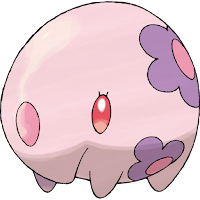 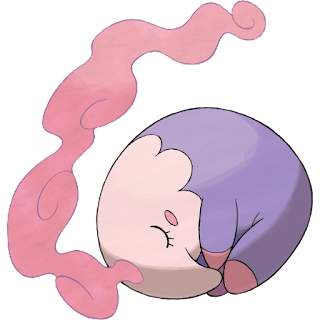 I hope you enjoyed looking at those monkeys, because the ‘second starters’ are the last original thought for a while, now it’s all equivalents all the way to the bugs, that’s 10 sets of Pokémon. It’s a dispiriting slog through the wasted potential of Gen 5’s ‘all-new Pokedex’ concept as Game Freak decided that instead of doing something creative now they couldn’t be relying on the same old ‘mons they’d been relying on they’d just create a bunch of equivalents to those Pokémon and rely on them instead, it’s the biggest flaw of Gen 5’s ‘dex if you ask me. Now some of these equivalents are good, some of them I like as much or better than the Gen 1-3 Pokémon they’re standing in for but it’s still a massive let-down and wasting the potential of an all new ‘Dex.
Munna and Mushana are our blatantly obvious Gen 5 equivalents to Drowzee and Hypno, two dream-themed tapirs based on Bakku, these are effectively the ‘feminine’ equivalent to the very male feeling Gen 1 Bakku, which at least is something Pokémon has been doing since Gen 1 and that fact does soften the blow (to be completely over-dramatic) of such obvious Catain Ersatz ‘mons, I can just about convince myself that these could have been added in any generation just like Gardevoir or something – if I’m drunk.
Looking at them on their own? Munna’s got an interesting bit of trivia associated with it in that back in Pokémon Red & Blue, a girl wished there was a Pokémon with flowers on it and some people took this to mean there was one (or once was one but it was scrapped), there wasn’t, but now there is. Which is cute and nice but it’s the flowers that do Munna’s design in for me, they have that horrible Gen 3-4 ‘undesigned’ willy-nilly placement that looks crap, the same shit that brought Liepard down to shitscoreland and ruin what is actually a neat little abstract tapir design that, lacking these shit flowers, Mushana gets to show off. Mushana in fact looks to me like a big, old soft toy and that’s pretty damn perfect for a sleeping dream thing isn’t it?