Examples of Crap I Waste My Money On: Bootsale Report 1!*

Boot sale season has begun! Again, for the imaginary American readers a Car Boot Sale, usually just shorted to ‘boot sale’, is an outdoor flea market though closer to a kind of communal yard sale as, although there are regulars, anyone can come and sell you their old crap, and they do, in droves. Today was the first week for my current favourite bootsale because rain stopped play last week and it was cancelled, so I dragged me mother up there for 7am to go and spend way too much money on dirty toys and dusty records. I always like to ‘bootsail’ with someone because I find it shames me into staying vaguely sensible with my purchases, and because I can’t drive. 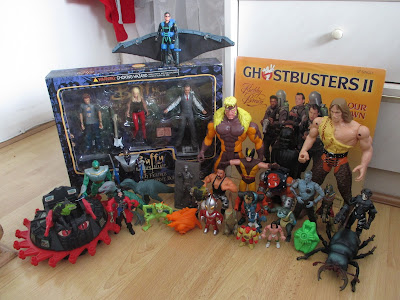 It turned out to be a pretty fruitful experience, though I will concede that much of this was due to one new toy stall run by a woman who endeared herself to me until she started using the sentence ‘this is rare and collectible’ as a prelude to asking for a price she knew would seem more than I’d consider reasonable – this pisses me off and I will just say ‘no it’s not’ and tell them the truth and ignore their offended looks saying “how dare you disagree with me, I’ve seen an episode of Toy Hunter!” because no seller ever says it about anything that is actually is a sought after or rare item and they always say it like they’re informing me for my own good: it insults my intelligence and makes the seller look ill-informed and/or dishonest. Anyway this particular woman did me a fairly decent deal, twice, and was marginally more informed than the usual silly bastards who whip out such lines so I can’t complain too much, though she did tell me the Jurassic Park Glider Pack I bought was complete – and rare and collectible – and it was none of these things. On a happier note I had the most surprisingly spicy samosa AND I came home with around 35 new things, some of the following I will now drone on about: 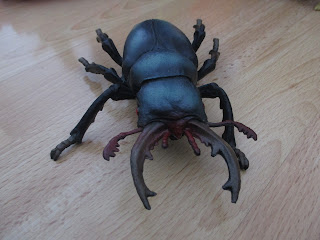 Henry!
50p (71¢)
My first buy of the day and lets me clear here I have no need for a hollow plastic stag beetle the size of my hand but I just found him so charming and as I dug through is box of cheap dinosaurs and pound shop safari animals a bond formed. Look at his eyes, saying “take me home, we’ll be friends for life”, so I did and we will be friends for life. Buying Henry, as I immediately named him, put me in a good mood for the rest of the morning (which I needed because it was a bit dire early on) it also got the following mildly amusing tale from the seller, lying I said I was buying it for a prank rather than a new plastic companion and the seller said “oh it’s good for that, before I came out today I put it down my daughter-in-law’s back and she went fucking mad”, who doesn’t want to buy toys from a man like that? 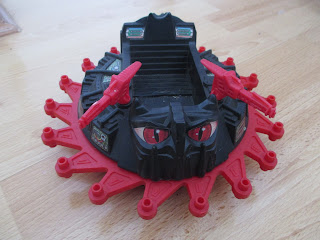 A Very Dusty Roton!
£1 ($1.42)
It’s very rare that my photos make something look better but let me assure you this was nearly charcoal with the amount of dust that it had on it. My old Roton is missing one of its guns, it would cost me more than a pound to buy a new gun, this Roton was a pound, I got a whole new Roton for the price of a gun, I call that a good deal worthy of blogging about don’t you? You don’t? Well… shit… I’ve done it now! I purchased my special desert strike version of the Roton from a regular seller I routinely buy from – really nice bloke, always has a chat, always has a couple of quid’s worth of stuff for me and always knocks some money off, not really that interesting or amusing but with so many sellers being grumpy, tired and/or dicks it’s always good to take the time to praise the nice ones. 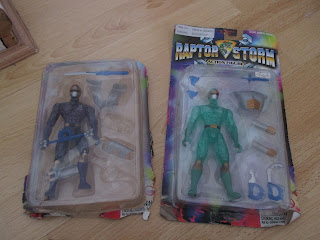 Raptor Storm!
£1 ($1.42) for the pair
Fuck yeah! One of the best Power Rangers bootlegs out there, whichever highly dubious Hong Kong company put these out released a second series of them but now in transparent plastic (and you know how much I like transparent plastic) and they went all in with the gimmick and made everything transparent, casting all their weapons in see through blue (the armour though remains non-transparent). A lot better quality than your average pound shop toy, these two are completely complete, the purple one does have all of its weapons, they’re just…scattered in that bubble – fun fact, the rest of the card wasn’t in the box these came from, odd. Actually it wasn’t a box; it was a plastic basket, the kind that you’d find alongside other 3 for a £3 Easter products in the supermarket, with these and some other dusty, battered carded bootleg toys (some dragons, some of those alien foetus things that the kids sued to stick on the ceiling of our canteen at school) on a stall otherwise selling a young couple’s random junk, I actually like finding things in this environment, it makes me feel better about buying them if the seller couldn’t a toss, if they won’t appreciate knock-off Power Rangers then they don’t deserve to have them and I have no guilt about paying ridiculously cheap monies to bring them to an environment where they are appreciated, and trust me, I appreciate transparent Power Rangers. The odd name btw is because these were released on the back of Power Rangers: Dino Thunder (though they’re based on the Ninja Storm Rangers). 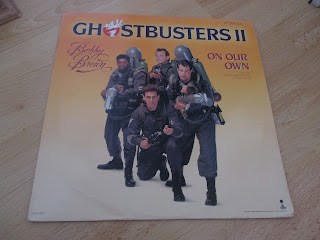 On Our Own 12” Single, from Ghostbusters II!
£1 ($1.42)
If you’re unsure what song this is, it’s the one with the ‘oh-oh-oh-ooooh’s that was played in the credits. Anyway when you buy stuff like this you’re buying the sleeve, I don’t need three mixes of On Our Own, no one does and personally I didn’t even need the record to come in it, only wanting that to be the case so it would keep the sleeve sturdier. It’s my favourite type of ‘from the hit new movie’ single sleeve: a promo photo on some completely unrelated background with the film’s title bigger than the song name or the artist; the designers know their audience, or rather, knew what their audience couldn’t care a less about (sorry Bobby Brown, but you know it’s true). This was at the front of some random dude’s random box of old 80’s records (6 in every 10 records on sale at bootsales were released between 1983 and 1990, 3 out of 10 are Herb Albert and the Tiana Brass and/or Bing Crosby, the rest are worth buying), I didn’t even stop walking, I just picked up the record, took it to the man, shared a look that said “I know, but I can’t help it, it’s Ghostbusters” and paid him the money, I regret nothing. 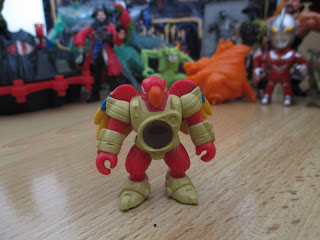 Rainbow Sam!
30p (43¢)
Oh look, something that’s actually worth money and something that toy collectors can actually see the point in me bragging about now having in my possession. This isn’t a Battle Beast; this is a M&S Battle Beast Laser Beast, a much rarer fourth wave of Battle Beasts that were mostly exclusive to Japan (some made it to the west as Battle Beasts: Shadow Warriors) that Battle Beast and mini-figure collectors go gaga over. To prove my point, while Sam himself isn’t currently available, the cheapest Laser Beast on eBay (Spark Shark) is £12 and the rest average at between £30-35, though those come with their guns. Sam here was amongst a pile of mini-figures and McDonalds toys at 30 pence each, I did well to hide my excitement (lol, as if) but out of guilt I grabbed a few other items to at least give the old couple a £1. Thus I am also now the proud owner of a Monster Sports Star in My Pocket, a Thundercats mini-figure I already own and a knock-off Ultraman which I’m sure you’ll all agree are way more exciting than this sought after collectible. I love Battle Beasts by the way, they really were the top of the mini-figure pile in terms of quality and value for money, I wish I had more money to put towards getting a more complete army of them. 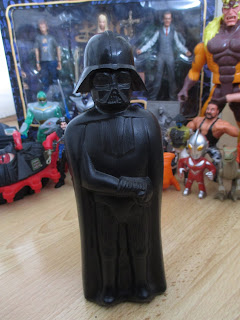 Darth Vader…um…thing!
£1 (1.42)
WHAT IS THIS THING!?! There was this great stall on the end of one isle that could almost be considered an antique dealer, with a bunch of respected and collectible toys like Corgi, Dinki and Mego’s Moonraker, so of course the only thing I wanted was this hollow, blow-moulded Darth Vader that no one had any clue what it in fact was. I still don’t know, I thought it might be some kind of bottle – shampoo, bubble bath etc – because it looked like the helmet came off, now I have it at home I’m not so sure, I’m not even sure it’s a legit licenced toy or when it’s from, thus I’m guessing it’s…some kind of…skittle, I have no doubt that a Star Wars lawn bowling set was released at some point during the early 80s where you knocked down evil Sith skittles shaped like Darth Vader, Strom Troopers and maybe Boba Fett. Whatever he is he shares Henry’s crude charm and like Henry I have had a conversation with him, and made him have a conversation with other people who were unfortunate enough to be in puppetry distance of me and Darth Skittle, why do I do these things?

I honestly had trouble choosing just 6 pieces of crap to talk about for this, and that is the best sign that you’ve had a good shopping trip, but I shan’t go on, as much as I’m sure you’re dying to read paragraphs from me about Real Ghostbusters ghosts monkeys from Bucky O’Hare I think less is more with these Bootsale reports, and that’s a nice way of saying I know I’m boring, now I’m off to tell my woes to Henry, and cry, and eat Cadbury’s Milk Tray, and play Dream Phone.
Posted by dwitefry at 13:30

Email ThisBlogThis!Share to TwitterShare to FacebookShare to Pinterest
Labels: Bootsale Report, Examples of Crap I Waste My Money On, Star Wars, Toys