The Toxic Crusaders cards are awesome!

In complete contrast to those boring-ass Space Jam cards from last time, Topps’ Toxic Crusaders does everything right, and by that I mean it does everything I like. The bulk of the set is what I was talking about in that Space Jam post, using screen grabs to tell us the movie or in this case, the first three episodes of the cartoon series, so you get to flick though the set and following the story like a tiny flip book – this gives me great pleasure. It occurs to me though that some people might not actually have a clue what the well Toxic Crusaders was, it was the baffling idea of turning an R-Rated B-Movie from Troma into an environmentally conscious children’s cartoon, the R-Rated B-Movie was The Toxic Crusader and the people who had the baffling idea were of course, Troma themselves. Wanna know the more baffling thing? It worked! It produced a fun cartoon and a brilliant line of toys from Playmates. Sadly the children of the early 1990s could not be trusted to have good taste and neither cartoon nor toys took off, relegating both to the realm of cult favourites. Anyway, back to the cards, I bought this set because I needed a third pack to get the three for a fiver offer and this blasé attitude towards these cards has continued right up until today when I finally opened them up just to write this post, I am so ashamed of myself, I’ve included my favourite things the cards do below, so are you sitting comfortably? Then I’ll begin.

Gorgeous Artwork of the Action Figures!

Easily the best thing about the Toxic Crusaders experiment was the action figure line from Playmates, completely compatible with their Teenage Mutant Ninja Turtles, which was still the shit in 1991 – at least in the UK - and felt as much like a spin-off of that line as their own thing, perhaps the hurt the Toxic Crusaders but I think everyone I knew bar me (who had a dad who loved The Toxic Avenger) had their figures had them because they either thought they were TMNT or because they worked so well with the TMNT so I reckon it helped sales if nothing else.

I have no proof of this but I reckon these lovely painted images were created for something other than just trading cards, either to sell the property to someone or more likely to sell the toys to someone or as something akin to cross-promotional images, to back up this not-so-big-leap that Toxie image, as line-art, was used all over the shop including in the advert for the Toxic Crusaders Game Boy Game. Regardless though if you had the action figures, or like me still have the action figures, you must get a little kick out of seeing them so lovingly painted, if you don’t you’re clearly grown up and had sex and shit and I dislike you intensely. In case you’re wondering why I’m so specifically talking about the action figures when these characters were also in the cartoon series that most of this card set seems to tie into? I’ve scanned the back of one them: 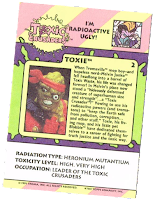 That’s a pictures of the toy, they’re all like that.

Troma can’t do anything un-weird, take Blobbie for instance, their take on ‘The Orko’, that little comedy kid identification character FILMation loved to shoe-horn into everything, Toxic Crusader’s one is a barely controllable bright pink radioactive Crite who was actually likeable. Hell for that matter take their version of ‘The April’, the token hot female all cartoons had to have post-TMNT, Troma’s version is a near-sighted barely clothed blonde Yvonne who plays an accordion and sings soprano so high and so badly it once shattered the forth wall. I loved both these two, Blobbie got a glow-in-the-dark figurine as pack-in with Toxie and I am still sad mine got lost and I’ve known this for a couple of years, at the time it really was the closest you could get to having a Critters toy, of course Yvonne never received a figure because of that bullshit that boys won’t buy figures of girls (all those Princess Leia and April O’Neil sales meaning nothing) I swear one day I’m going to release a line called ‘Toys They Didn’t Make’ and it will 80% female characters.

Now I’m sure that both these shots are important moments from the episodes and I’m also sure that these scenes could only have been achieved using these vehicles and no other type of propulsion device and the fact that Playmates had both the Smogcycle and Toxic Turf Surfer on toy shelves for children to beg their parents to buy for them had absolutely no bearing on their inclusion in either the cartoon episodes or the cards made from them so isn’t it cool to see two of the Toxic Crusaders toyline vehicles on trading cards?

A sort of cross between Hanna-Barbera’s Godzilla, Hedorah, the Blob and a living oil slick Polluto was one of the shows completely obvious environmentally friendly ‘metaphors’ but it was the Toxic Avenger versus a kaiju – twice! and of course in true b-movie style it can only be destroyed by hitting it with illogical things (in this case kitty litter and geriatric’s pills, though the kitty litter thing made total sense to me as a child because kitty litter is absorbent so it absorbed all the oil, duh.). Child me always wondered why Polluto wasn’t released as a toy, it would have made so much sense to have made him a big boxed toy I thought, well guess what? They were going to and he was going to look amazing: 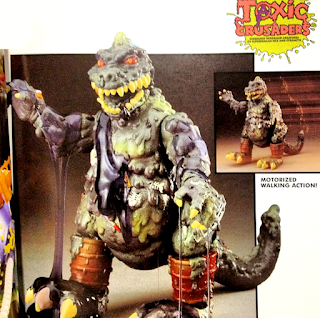 Proof that I have never grown up (as if you needed more) I got so excited when I saw this. Yeah Dr Killemoff doesn’t actually look like a rockabilly vampire because that wouldn’t be enough for the company that produced Chopper Chicks in Zombieland, he is in fact – in true b-movie style – a bug from outerspace who’s upper lip has been replaced with Ripper Roo’s testicles. What made me so excited is it felt like you NEVER saw Killemoff’s real face, I’m sure that’s just my sepia tone childhood memories and he was always getting it out ala Laurence Limburger but it never felt like that and it was certainly something you couldn’t just get a picture of - this was in 1991, you couldn’t press PrtScrn on YouTube - but apparently you could get a picture of it and had I been buying Toxic Crusaders trading cards like I should have been I would have had reference for it all these years. Which leads me into another point, I never saw these bloody things in shops when Toxic Crusaders was current, they were never in Woolworths or Tesco or our corner shop like the Turtles or Marvel Universe was or Pokémon would be; the only time I ever saw them was when I was a teenager in a comic book shop in Chadwell Heath (imagine a quaint British suburban town, but after the apocalypse and you get Chadwell Heath) amongst all the other utterly worthless trading cards they STILL HAVE on their counter at ridiculous prices, that was nearly a decade after the show went off the air.

These came out fantastic. This is the only one of the three sets I bought from that couple to include it’s chase/insert cards (well stickers) and I couldn’t be happier, if I had to choose between shiny Gen13 cards, lenticular Michael Jordan or 3D metallic Dr Killemoff I’m picking the latter, though lenticular Michael Jordan IS pretty enticing. My scans don’t do them justice, I don’t think any scans would, but these are really 3D and really creepy, the best is easily Psycho he is utterly terrifying, if you move the card it looks like he’s bearing down on your more and more and you can’t see it here but behind him are cute little 2D Radiation Rangers. I suppose Bonehead and Junkyard are the worst, they’re stiffly posed, bizarrely off model with Junkyard seemingly doing the Bushwackers dance, my favourite is the final sticker though, the closer shot of Toxie, because it was also used on the card art for the action figures – I really like those action figures ok? I know I’ve mentioned them in just about every part of this post! Leave me alone!

Actually I’m all done, so you can leave me if you wish, all you’ll miss is me going to the loft and showing my Toxic Crusaders figures their cards “and this one’s you Nose-Zone, from when you dressed as a magician and got eaten by Not-Audrey II”. Thanks for reading! 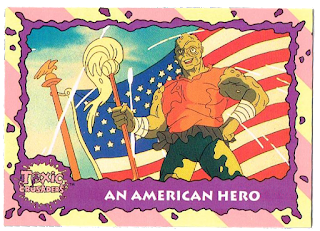