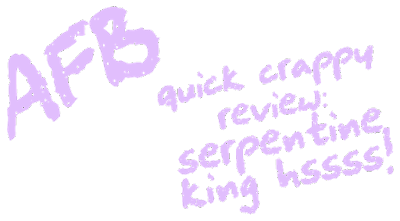 King Hiss is the third ‘big bad’ of the He-Man’s world, following Skeletor and Hordak, Hiss leads the Snake Men and hails from ‘Preternia’, the prehistoric era of He-Man’s planet. His figure came out in 1986, too late to appear in either the He-Man & the Masters of the Universe or She-Ra: Princess of Power cartoon, his action feature was his arms and torso/head clipped off to reveal a snake monster underneath, his ‘snake torso’. Hiss (now spelt Hssss) got his first action figure in Masters of the Universe Classics in 2011 but many fans were unsatisfied, he was based solely on the toy, he had reversed shoulders and his snake torso was considered lacklustre (despite being accurate to the vintage figure). Serpentine King Hssss is an extra non-subscription figure for Masters of the Universe Classics released in March 2016 but delayed from November 2015, from the 15th to 29th of March it was available at a discounted price and only to 2015 subscribers on Mattycollector.com via an e-mailed link as part of a concession to subscribers because the release is built around a cut item (the torso) and is a very controversial solution to that item being cut. If that’s all you needed to know before reading my thoughts on this, King Hiss’ ‘true form’, as a figure, please skip the following paragraph.

The Snake Torso, which this release has been put together to get to fans, was first displayed at San Diego Comic Con 2014 alongside a two-pack of Snake Amor He-Man and Battle Armor King Hssss. Then-Brand Manager Scott ‘Toyguru’ Neitlich was upfront that this torso wouldn’t come in that 2-pack but subscribers would definitely receive the item as it would be packed with another figure (Buzz Saw Hordak as it turned out), he made this statement more than once including on an official Mattycollector.com video. When the final items for 2015 were revealed at San Diego Comic Con 2015 the torso was nowhere to be seen. Between the two SDCCs Neitlich had left Mattel and the brand and the Masters of the Universe Classics line was under the direction of the New Team™, when they were asked about the torso direct at the convention they were somewhere between confused and embarrassed and offered a nonspecific ‘it’s coming’ answer. A stank was raised online until the New Team™ gave their solution a week after the con: the torso would be included as part of a stand-alone figure because including it with Buzzsaw Hordak didn’t cost out1; so to clarify they took something that was originally a free pack-in included in a subscription and making it a full price stand-alone item. Fan reaction wasn’t positive. And as 2015 wore on more mistakes were made by New Team™ that only made fans even more negative2, the team were also very uncommunicative around the time (allegedly due to personnel changes) including taking down and editing the thread about the torso on their own boards (allegedly due to offensive comments), none of this helped. Fans contacted the Better Business Bureau due to the dubious legality of all of this and were taken seriously; eventually Mattel allowed fans to cancel their subscriptions as… a consolation (?) but their ‘solution figure’ solution remained the same. Then the figure was eventually said to be coming in November 2015 but got delayed (due to the factory stamping ‘made in china’ on the front of the torso) to January 2016 – so now not only was the item not in the 2015 subscription, it wasn’t even coming out in 2015. Then January 2016 came and the figure wasn’t on sale, the final plan and final sale date (March 2016) but there were still issues: if you cancelled your subscription or had you subscription cancelled for any reason in 2015 you didn’t get the necessary e-mail, and everyone was limited to a maximum of 3 figures despite how many subscriptions they had (and yes a fair few people did have more than 3). 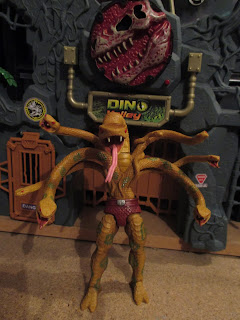 You can come back now. I like this figure, for what is essentially a snake man in his pants he looks pretty damn menacing and this is the first time we’ve seen Hiss’ ‘bare’ legs (usually only his upper half transforms) so the figure also has a little piece of added significance that isn’t related to its controversial origins. I also really like bendy toys, and everything from Hiss’ waist to his neck is one big bendy toy to play with; his central head and the small snake over his left shoulder aren’t posebale, the head is a separate piece and mine has the slight gap at the neck joint some of these are coming with (bonus extra?), but that still gives me six bendy snakes to have fun with and fun was had, sadly the snakes become less bendy the closer to their heads, which takes away some finer poseability and effectively means he has no wrist articulation, it’s actually something that happens fairly often I find, Justoys Bendies from the 90’s get less poseable at their extremities but it’s still a little annoying. The entire upper body is the snake torso that was supposed to come with Buzzsaw Hordak and is thus entirely new and fantastically sculpted – the Four Horsemen excel at creatures and this is a man made of snakes so excelling has happened – everything below the waist though is reused, the figure was never supposed to exist and was, frankly, a rush job so no exclusive parts could be tooled up for it, however percentage wise he’s more new tooling than many planned figures so I’m not seeing an issue personally, his pants come from the original King Hssss figure and his legs from the Snake Men two-pack (though they were sculpted for Rattlor), the legs make complete sense and fit nicely with the upper half, the prototype (was it a Photoshop?) made me concerned that the markings on the legs would stick out like bollocks on a bulldog but they actually integrate fairly well. The pants though… I am most certainly not the only person to question the pants, see this was supposed to be the snake torso for the Battle Armor King Hssss – who was based exclusively on the 200X look for the figure, yet instead of that badass loincloth they chose the original’s speedos, so there’s a complete lack of logic there but also, did nobody at the team look at this figure and think ‘he looks like he’s in undies’? Like I say he looks good in spite of this, but they had the parts to remove this issue and using those parts would have made more sense so it’s just weird. Oh, I’d be remiss if I didn’t mention that the factory assembled him wrong, they put his central tongue in upside-down (it’s supposed to curve upwards, not downwards) some people have deemed this the ruination of the figure, I couldn’t give a flying fuck but it is a thing. 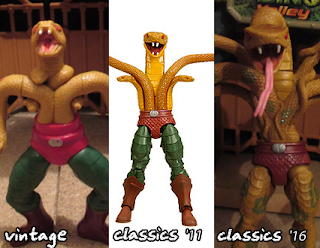 Serpy Hssss is fucking loaded with accessories, four weapons and one head…um…all of which he can’t really use. All the items are taken from the Snake Men two-pack from 2012, they were good there but they are really good here. The weapons have been repainted in charcoal, greens and silver and that colour scheme just looks fantastic on anything – maybe it’s because I’m a big fan of Halloween and these are undoubtedly Halloweeny colours, maybe growing up in the 1990s conditioned me, whatever it is my mind instantly equates ‘cool’ with ‘black and green’. Of course Hissy can’t hold them very well, or at all, the spear fits but the lack of wrist articulation means he can’t really pose with it much, you can just about balance the sword, the mace is completely incompatible and the clip on the shield is too wide, I was able to balance it on a snake occasionally but it doesn’t stay. Now I don’t think the weapons were meant for him per-say, they were just included to bump up the perceived value of the release, but it’s still daft to give a figure weapons they can’t hold, on the plus side your Snake Men are going to look a shitload snazzier. He also has a fantastic alternate head… for the other two King Hssss figures, of course we’ve had heads included with figures that were meant for other figures but at least those figures could use them if you wanted, poor old Serpy Hssss hasn’t the option. The head though is fantastic, showing King Hssss’ face transitioning from humanoid to snake, it’s a superb piece of part reuse (it’s also from the Snake Men two pack) and while I doubt many people will have it on display, including me, I fully appreciate the cleverness of it and wish I had a fourth King Hssss to use it on (note: the head seems to have had its colours matched to the original King Hssss, not Battle Armor King Hssss, thus it’s a little dark for BA Hssss, I’m thinking this was a cock up/oversight because I’ve been conditioned to think this of the New Team™ over the last six months of 2015, but it could have been intentional to give a different display option for that figure now you have the generally preferred Battle Armor figure and the generally preferred Snake Form with its own legs – well it could be! Yeah I know...) 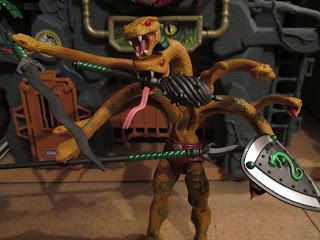 In conclusion it’s a bit of a shame, taken out of context Victoria’s Secret Serpentine King Hssss is good value for money (MOTUC-wise) and actually pretty creative, yeah he can’t use any of his accessories but we still got five of them included for $20 and they all look good. But it’s very hard to divorce him from the crap that caused him and I would be utterly lying if I didn’t say that all of that still clouds my judgement, something really can’t be truly good value when it was supposed to be free and you now have to pay for it, sure you’re getting a lot more for your money than what was originally supposed to be free3 but it still niggles y’know? Plus it’s really not something that you can say ‘oh well, ten years from now it won’t matter and later fans will just buy the figure and enjoy it’ because it’s always going to be there, his entire existence is because of the behind-the-scenes mistakes and the controversy it caused, it’ll always be with him, especially if people like me post it on the internet for everyone to find forevermore. 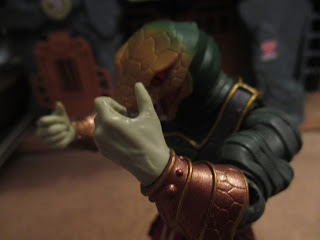 1 a common fan theory is that the team forgot about it and gave Buzz Saw Hordak a newly tooled chest, thus the torso didn’t cost out, I don’t know if that’s ever been confirmed though.
2 amongst these problems: not providing an ‘Early Access’ sale for subscribers for the SDCC item Rotar & Twistoid (the same day the announced the separate Hiss Torso figure!)  even though it was a perk that was offered in writing on the subscription sign-up page for the 2015 subscription, a terrible Teela figure for the Point Dredd set that they seemingly deliberately hid from fans, ‘accidentally’ starting a concern that the Laser Light 2-pack wouldn’t ship to Europe and an update from New Team™ member Skeletor’s Love Child that dovetailed into an angry telling off for fans (though I have an idea a minority deserved it, some were pretty foul to them on Facebook, most of the fandom did not).
3 yes technically the snake torso wasn’t ‘free’ it was worked into the price of Buzzsaw Hordak, you know what I mean.
Posted by dwitefry at 08:43