It's a quick and easy Pop Culture League this week - well at least in theory. We're still tying into the U.S. Presidential Race (I'd like to passively-aggressively thank everyone who voted for Donald Trump and I hope they're looking forward to the upcoming third World War), that isn't why I didn't do last week's League, in fact I'm annoyed I missed it because it would have been a great chance to talk about Transmetropolitan and use the term 'whorehopper' repeatedly but life got in the way (or death in this case, actually).

I have a funny feeling it's the opposite in America (what isn't?) but over here red means Labour (or Monday Night Raw) so it's red all the way. I was tempted to just post a huge picture of Ken Livingstone's face or maybe make a collage of Teresa May out pictures of my arse but the hair made it appear more brown than red and I didn't want someone nitpicking in the comments. So instead here is snaps from a small set up of literally every red toy that was in the boxes I could reach... without moving. It's been a tiring few weeks alright? Click to enlarge if you want to see a really huge picture of the sausage ghost from Real Ghostbusters. 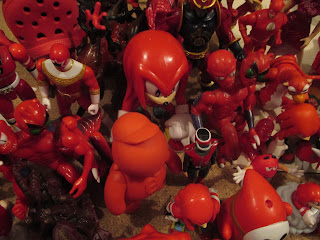 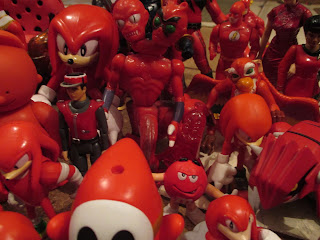 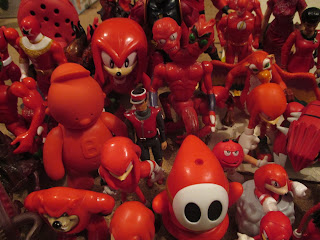 From this you should be able to deduce the following:
- I really like Knuckles the Echidna
- I own two Moduloks
- Those Jelly Babies action figures that were released in the 1990s and you forgot existed really did exist
- I don't own a red bed sheet

I hope these things help you better understand me
For the next window into my soul, I think I'll take pictures of Care Bears in amusing and possibly sexual positions. Hm, no that joke doesn't work because that really WOULD tell you a lot about me (and my huge childhood crush on Wish Bear).

Here's a few other picture-takers:
Mr Smith's Plastic Bubble uses Transformers to prove an awesome point
Green Plastic Squirt Gun needs to stop posting things I want to buy, that transparent Venom is the sex
Go make The Toy Box feel better after their surgery imaginary readers, they have Smurfs.
Cassie's Library has, well, I'm just linking to it because Neo Pets
Oh and pop to 2 Minute Toy Break for some coffee