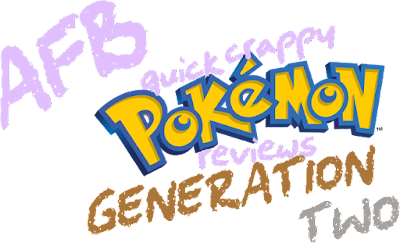 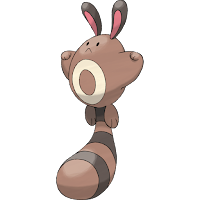 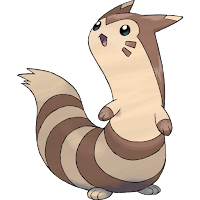 By comparison, Gen 2 has easily my favourite com mons, as much as I heart Bidoof it just can’t measure up to my beloved Sentret. Otachi as a I STILL fucking call it to the confusion of just about everyone is just such a super-cute little raccoon thing with a surprisingly expressive little face considering it’s two lines and two dots. Look at it’s little ‘UNACCEPTABLE!’ face up there, now look how happy it can look with minimal effort: 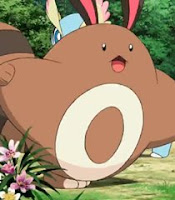 Expressive AND cute, good design work that. Also no I don’t think it’s a flying squirrel, I’ve always seen a raccoon but what people see as glider-like arms I think are just odd-shaped arms, I’ve never seen one glide in the anime either (though I didn’t watch it so much in the Gold & Silver era, Google turned up nothing), what I see it doing rather than ‘gliding’ is, well this:

It’s just making itself look big!
And then it becomes Furret, who’s really kind of boring compared to the random mix of mammalian things thrown together to make Sentret but it only marginally less cute, in fact it has the same face, just with bigger eyes. But do you wanna know that I like about Furret – well obviously you do because otherwise why would you be reading this shit? – I like how it still has lemur/racoon/red panda style rings up its tail but because of it’s very ferret like body, it’s really up a lot of its body, that seems to me like how that would work if a racoon-bodied thing switched to a ferret-bodied thing when it evolved at level 15, does that make sense? No? well Furret’s markings make sense to me. 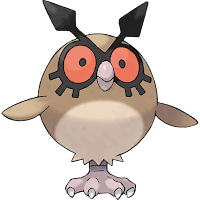 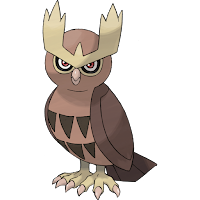 The two Gen 2 Com-Mons have a lot more in common that I thought before doing this. I mean they’re both brown!
The quality of that humour should show you how tired I am while writing this. and yes it IS fitting that I’m writing the review of owl Pokémon that only appear at night in-game at Christ-knows-when O’clock in the morning.
But they are quite similar, they’re both made up of a Pokémon (that is indeed brown) that’s a very creative and unique take on what it’s supposed to be (a woodland mammal/ an owl) that draws in various sources (various mammals/owls and clocks) with something noteworthy about its stance (standing on it it’s tail/standing on one leg because Ken Suigmori had a pet bird that did that) that evolve into something that, while still cool, is far more boring. The difference is we now know that Noctowl was going to be very different:

Now I like Noctowl, it’s a fucking badass owl design with resting ‘you are about to die face’ and I would never EVER want to mess with one, it also has a nice body (shut it!) with a great design that simplifies an owl’s body into a series of pleasant shapes with a very designed feel to them. But Proto-Noctowl, as revealed in the Space World Demo, actually looks like it comes from Hoothoot – it keeps the design elements that define Hoothoot – the roundness, the one legged stance, the overall make-up of its design – while keeping what makes Noctowl great – the ‘I will end you’ elements of it if you will. Though both sadly loose the clock design elements though. In an ideal world, Hoothoot would evolve into the proto-Noctowl while the final Noctowl would’ve been its own single stage ‘mon, but as my sex life proves – nothing is perfect. 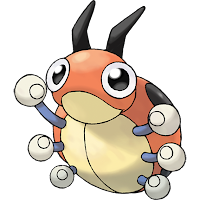 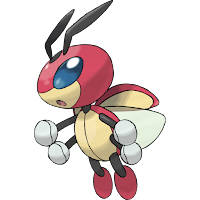 The Ledyba Line
So Bogleech, who I’m ripped off wit these reviews remember, is unhappy with the Gen 2 bugs not having a larval and pupal stage like other regional common insects in the Pokémon World do [http://www.bogleech.com/pokemon/p165ledyba.html], I get his point, it doesn’t make too much sense from a design perspective – after all Ladybugs do have rather cool larval stages that would have made great Pokémon – but I think it makes sense if you look at it from a Pokédex filling angle. Johto’s ‘dex is just an updated and expanded version of Kanto’s, it’s the ‘New Pokédex’ (that’s used in both locations by the time Gold & Silver is set rather than a regional one), Johto inherits Kanto’s bugs, meaning it already has two perfectly serviceable three stage evolutionary lines (Weedle and Caterpie) and doesn’t need anymore, but a couple of two-stage Bug Types to compliment them? That it could do with (with only the Venonant/Venomoth line around and that being a later game ‘mon).
I’m cool with Ledyba, it’s cute while still looking like it can hold it’s own, adorable but scrappy with it’s little fists and it evolves into Kamen Rider! Ledian is cool where Ledyba is cute and in a generation where they introduced an evil type (Dark Type) and made it weak to Bug Type solely because of Kamen Rider it makes a lot of (completely accidental) sense to introduce the Kamen Rider Pokémon at the same time and y’know, if you’re cute but scrappy and gonna aspire to be anything, aspire to be Kamen Rider (or Batman, I guess). 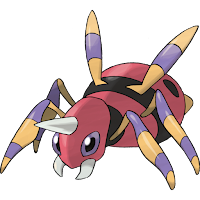 I’m also cool with Spinarak, it’s cute but not too cute which for me is what a straight-up Pokémon spider called for, it’s also very nice to see a cartoon spider that isn’t black or grey, I say that a person who owns no clothes that aren’t black or grey so you may think I’m being a bit hypocritical but it’s just nice to see something different being done, and the colours sure scream ‘poisonous’ (which it is, it’s a Bug/Poison type), plus I just love false face markings on things.
Which is why I’m a little disappointed that Ariados loses that aspect when initially it wasn’t going to:

Those are the earlier designs of Spinarak and Ariados from (where else?) the Space World ’97 Demo and you can see that instead of loosing the false face markings as Ariados does, it would have become more prominent to the fact that, if we go by it’s back sprite it seems that the false face might not as been so false at all, as between the two sprites the markings have changed expression. A cool as Ariados is (and it’d say it’s one of the ‘objectively cool’ ‘mons) it’s not as creepy. It also has those two legs, which are weaponized as far as I know, they put me in mind of those wing things that showed up on a lot of characters in the 90’s, sadly the only example I can think of is the Black Canary from DC Comics’ Kingdom Come – which is a western product: 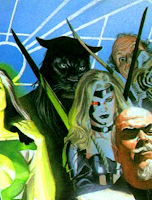 But it seems to originate from Japan on things like thier mecha. I’d suggest this was intentional, especially with Ledian having a clear Kamen Rider influence and knowing what a bunch of utter nerds the Game Freak staff are – Pokémon as a whole owes much of its existence and basic concept to Ultraman (well, Ultraseven) – and the team are clearly big fans of monster movies, sci-fi, anime and manga.
Both sets of Bugs are getting 3.5 scores btw because 3 is used in these reviews to signify indifference, and while I’m hardly shouting their praises from the rooftops I’m much more than indifferent to them. 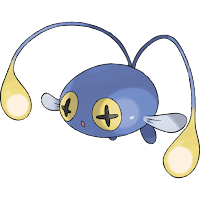 Angler fish are not cute, in fact they’re some of the least cute things alive. They’re awesome, but they’re certainly not cute in any way, shape or form.
So just by being the sweetest, cutest, happiest angler fish ever, Chinchou and Lanturn earn a whole bunch of originality points. It is very strange that someone at Game Freak saw these deep sea horrors and somehow translated that it into ‘kooky cute’ and ‘Flipper’ but then Generation 2 is, overall, a far cuter, softer, kinder looking series of ‘mons, if angler fish had arrived in later generations it would probably have looked like something from Chucky or Angelica’s nightmares and I can’t help but feel that would have pleased more people.
Whatever. These two far fine by me, both are unique and unusual as angler fish indeed are and both are too cute to be annoyed at them, yeah I’d’ve liked a big, monstrous, badass Angler Fish instead but then Lanturn looks at me with it’s big happy face and it’s domino mask and I give in and want to hug it. 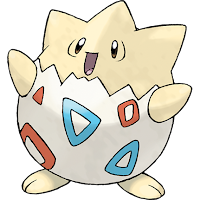 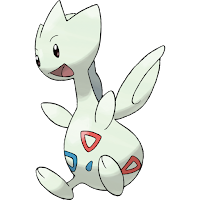 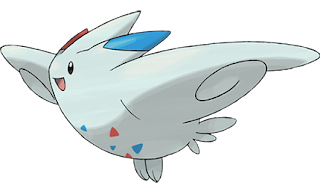 Togepi might be the best argument against the existence of ‘Genwunners’, a derisively named group of nostalgiatard Pokémon fans who reject anything beyond the borders of Kanto and given how desperate many fans are to prove they’re not Genwunners (often because they have a lot of the attitude and opinions that such people would have i.e. they are clearly fucking Genwunners), you’d think more people would zero in on this, because everyone who was around in Gen 1, including this contested group of arsehole fans, loved Togepi, and Togepi is Gen 2, so if you loved Togepi you can’t technically be a Genwunner, though you do still have the same shitty attitude to the franchise because you only accept Togepi because it was around during the Gen 1 era in the west.
For the very young – or simply not a very old as me - Togepi was one of the Gen 2 ‘preview’ Pokémon (the others being Ho-Oh before it and Marril after it) thrown in to tease the upcoming Gold & Silver games. Even though the anime was shown to promote Red & Blue to us westerners, it was developed alongside Gold & Silver and thus this is how Ho-Oh could be in the first episode and how come we could have a long story-arc about the hatching of Togepi before we met Mewtwo. Being an adorable, super happy, MAGIC baby the whole fanbase fell in love with it.
But you know what I see when I look at Togepi – one of those generic soda cups you got in generic fast food restaurants, usually in places like bowling alleys, fun fairs, theme parks or holiday camps. They all had that design that Togepi has on its ‘egg’ on them! All of them! They used make me think of Saved by the Bell, now Togepi makes me think of them. And it’s worse on Togetic, because it gets taller and looses the peach parts, it looks even more like a soda cup! What is going on!!?
I never really took to Togetic, Togepi is a Baby Pokémon so I can see the need for it become something but Togetic was just of ‘a lankier Togepi that wasn’t as cute’ and it always felt like it needed to evolve again – it still looks very ‘young’ and overall has the feel and stats of a midvolution rather than the final stage. Luckily Gen 4 game to the rescue – as it did for many a Gen 2 ‘mon – and brought us Togekiss, whereupon it’s stomach markings get even more like those soda cups! It was intentional wasn’t it? Sugimori popped to the Roller Bowl up the road and had a 7up during the development of Gold & Silver didn’t he?
Moving away from my madness, Togekiss is great, Togepi finally grew up without loosing that completely unidentifiable thing element to it’s design, or it’s cuteness, and now it’s a Fairy Type (well Fairy/Flying) it also grew up into something that can easily kill dragons. And badass adorable is a thing I like, remember?