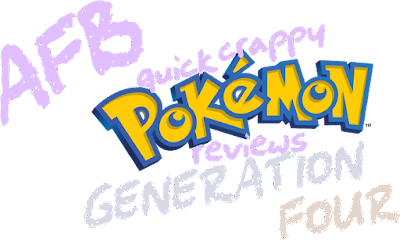 Welcome to Sinnoh! The slowest Pokémon region of them all!
Generation IV is the first generation of Pokémon for the mega popular Nintendo DS, the first console to host two generations (Nintendo can consider the Game Boy and Game Boy Colour the same thing all they like but they’re not are they?) and…it wasn’t a good start, but it got better. The Generation began with Pokémon Diamond Version and Pokémon Pearl Version and their low framerate and included their ‘third version’ Pokémon Platinum Version which fixed that low framerate and the excellent Generation 2 remakes Pokémon HeartGold Version and Pokémon SoulSilver Version which came with, of all things, an award-winning pedometer with the Pokéwalker (plus of course various spin-offs). 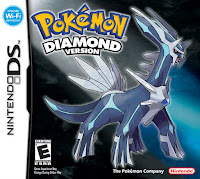 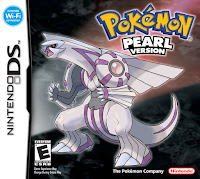 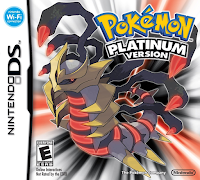 With the introduction of online battling and ‘the Physical/Special split’ - which changed the viability of Pokémon in the competitive scene by individually categorizing moves as a Physical move or Special move rather than having all moves from the same Type all be Physical or Special – this is the generation where the Pokémon competitive gaming scene really took off so competitive gamers are quite fond of this generation - pity I’m not a competitive gamer. I didn’t like the Generation from the start, the art-style for the Pokémon had gone even further into wherever it ended up in Generation III and that put me off before Diamond & Pearl came out, then the games were filled with confusing maps with some bogged down with weather effects that slowed an already slow game. The only reason I can’t say this is my least favourite generation is because a) Platinum fixed all of those issues and 2) HeartGold & SoulSilver are TERRIFIC. 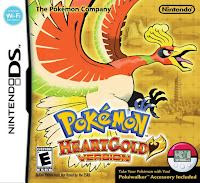 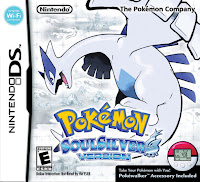 Anyway fun fact: I actually wasn’t going to write these in order starting with Generation 1 and I actually wrote Generation 4 first because it was shortest, a good chunk of the new Pokémon were cross-generational evolutions and would be covered in Generations 1-3’s reviews, so I could skip them. It was a perfect plan until I got to the round-up and realised I couldn’t do it because I hadn’t covered all the Pokémon. Oops. This is the re-written versions of those.
Right, lets get on with it. 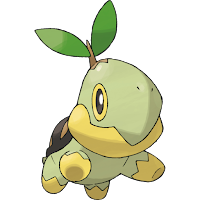 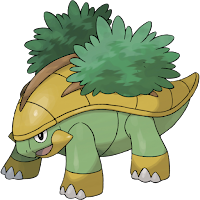 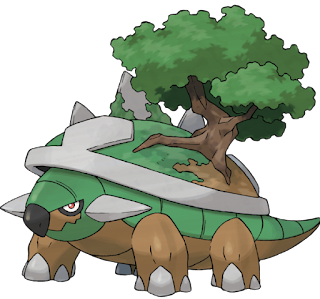 Gen 4’s starters are VERY derivative of Gen 1’s and their grass starter line is the most so – why, it’s derivative of two lines! We have shelled animals everyone mixes up with turtles that become extremely badass armoured tank monsters (Squirtle line) that are also quadrupedal green non-mammals with a plant on their tops that blossom as it evolves (Bulbasaur). That’s pretty shit really and everyone at Game Freak should feel completely ashamed of the complete lack of fucking effort that was put in when figuring out to go about the concept of ‘grass tortoise’. However I adore this line and do so solely because it mixed tortoises and ankylosaurs and ends up with you having a Pokémon that’s an Ankylosaur Island at your command. Ankylosaurs are my favourite dinosaurs, bite me.
Torterra is magnificent; I could have not hoped for a better Ankylosaur in Pokémon: it has a fucking ecosystem on its back! Why? well World Turtles are REALLY common in myths around the world – India, China, North America, Discworld, they all have them, one was in Avatar: the Last Airbender too, and surely you’ve heard about the old woman and the ‘turtles all the way down’ thing? It’s almost Schrodinger’s Cat level obnoxiously common with pseudo-intellectuals haunting shit student bars and interweb comment sections! I’m not going into it, Google ‘turtles all the way down’ if you wanna known, after the inevitable Ninja Turtle incest porn you’ll get what you’re looking for. As for why it’s a tortoise not a turtle, other than people mix them up all the time (including the team that named these ‘mons in English) it’s probably basd on the Black Tortoise, which is Chinese is origin but one of the guardians of Kyoto in Japan. I love this sort of shit, the sheer amount of things that Pokémon designs pull together that make its design, typing and special abilities make so much sense, from zoology to mythology to industry to pop culture, I like it even more when it’s attached to a mean-as-fuck-but-still-lovable Ankylosaurtoise.
I could do without Turtwig’s feet markings, which manage to scream both ‘things I hate about Gen 3’s deigns’ and things ‘I hate about Gen 4’s designs’ but everywhere else he’s golden and it seems pretty harsh (even for me) to hate on a tortoise so cute because of his yellow feet. , he’s my least favourite of the three but then he’s not an Ankylosaur. [4] Grotle on the other hand IS and he’s an akylosaur that looks like a statue and/or weaponry from some ancient culture without being too gaudy - the bushes are a bit naff though. I get the whole ‘camouflage’ thing and I bet they’re a lot more useful in a lot more situations than Ivysaur’s bud but that’s kind of why they’re naff – bushes are everywhere and they’re boring, not even strapping them to an Akylosaurtoise that looks like a Spartan’s shield can stop them from being boring and Grotle suffers from it, like he’s trying to be cool but completely failing because bushes are in no objective or subjective way cool. 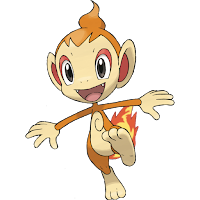 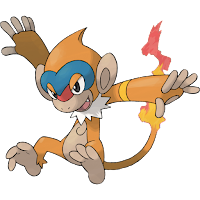 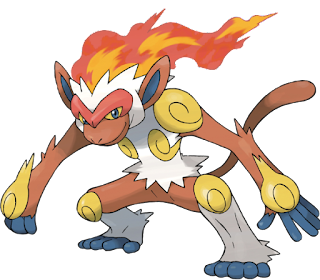 Continuing on with our super derivative Starters, it’s ‘What if Charmander was a Monkey’ and poor Chimchar really is a step down in creativity from Mankey, Primape and Aipom ain’t he? I mean he’s just a cartoon monkey with fire bits attached, but then Charmander’s just a cartoon lizard with fire bits attached.... What Chimchar is is a) adorably cute 2) adorably happy c) adorably dopey - so it’s cool, it’s just not very original compared to its predecessors.
The more I look at Infernape though the more I like it (I also really like its name) it’s a very busy design but then so is Torterrera, and just as Torterra’s level of detail is acceptable because it’s armour, Monferno’s detail is acceptable because it’s, well, bling. More modern Pokemn can fall into the trap of over-designed but here it makes sense: all monkeys designed by the Japanese MUST recall the monkey magic of Son Goku, their version of the Monkey King from Journey to the West (and I’m pleasantly surprised Infernape didn’t end up looking like SonSon on fire  - and greatly appreciate this, I’m so fucking sick of Journey to the West, really Japan: enough) Infernape is no different, and likely inspired by Hanuman the Hindu god too, so it makes perfect sense that a monkey with Chinese, kingly and Hindu God aspirations would be have a lot of swirly gold accents, because swirly gold shit is a sign of utter fanciness and godliness for all three of those things. it makes sense, it makes it look suitably ‘Chinese’ or ‘Hindu God’ to ignorant spods in other countries and makes it look damn spiffy.
Monferno is out first clear-cut case of THAT ONE THING Syndrome in this generation. Where everything’s fine except THAT ONE THING. I suppose it could also be called THAT FUCKING SEASHELL BIKINI Syndrome but I think more people would assume I’m bashing on Ariel, and why would I do that? I mean yeah, she sold her soul for a vagina, but she’s cute. Monferno is not cute, nor is it a tortoise, so it’s not getting away with it. Monfero’s face is just awkward, not the colours - I get why they’re there, but the whole segmented design of it and how those interact and in what order they fall, the whole thing would be far, FAR better if the blue brow hung over the eyes, sometimes it IS drawn like this (not by Sugimori though so I’m taking it to be erroneous when it is) and it just makes the monkey so much more pleasing to my eye: 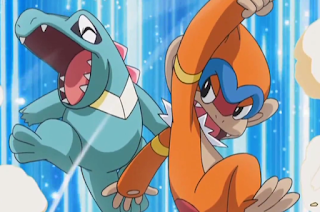 It’s THAT ONE THING that’s making Monferno get a shit score. We will be seeing this again I don’t doubt. 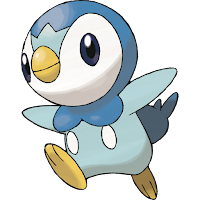 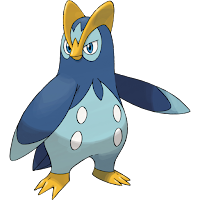 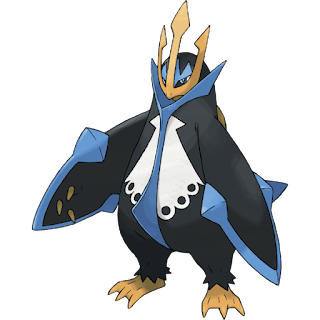 Penguins are my favourite animal. I will not be restrained.
IT TOOK FOUR GENERATIONS BUT WE FINALLY GOT A PENGUIN AND IT’S THE CUTEST FUCKING THING THE POKEVERSE HAS EVER HAD THE JOY TO EXPERIENCE! IT IS THE FUCKING MORNING SUN AFTER THE DARK NIGHT OF CUTE POKEMON! IT IS GLORIOUS AND BEYOND REPROACH! IT DOESN’T HAVE A FUCKING BOWTIE BUT INSTEAD SOMETHING THAT RECALLS A BOWTIE BUT REALLY ISN’T! IT EVOLVES INTO THE KING OF SAMURAIS! IT DOESN’T HAVE THE DESIGN ISSUES THAT A LOAD OF GEN 4 AND GEN 3 POKEMON HAVE! SOMEONE ACTUALLY SHOWED RETRAINT! IT IS JUST WHAT I WANTED!
Pity it evolves into Prinpulp. Prinplup is just so…so…bleh. I’m trying to put into words what’s wrong with it and have come up with this: a design that should have been left in the sketch book, sometimes you design something and it doesn’t work, it’s just the way it is, everything you were trying for doesn’t happen, it’s not bad per say, just not right, a failure, something to work from or redesign when your creative mojo is firing on all four cylinders rather than running on fumes. That’s what Prinplup is, it’s the design that didn’t work and should have been redesign or abandoned to refine and improve everything on it. Midvolution Syndrome at its most blatant.
Meanwhile Emploen is fucking boss. I do think that I would have preferred if it had been entirely armoured or armoured from the neck down but instead we have a penguin that’s been, well, sharpened, it’s kinda a penguin knife rather than a penguin knight and I’m so okay with that. I find the wing claws completely unnecessary but they’re exceptionally unobtrusive so whatever.

Jesus, two gold six scores in the Starters alone, I thought I didn't like this gen?