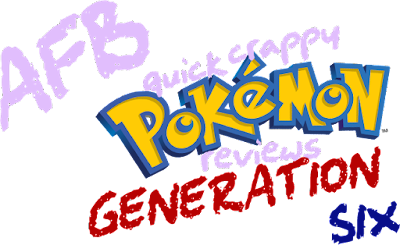 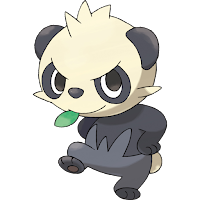 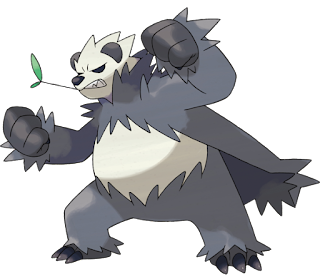 Banchō is a leader of juvenile delinquents in middle and high schools in Japan, it’s a position that’s fought for (and sometimes campaigned for!) and if you’ve familiar with Danganronpa then you’ve met one in Mondo. The term is actually quite antiquated and the stereotypical Banchō is apparently quite uncommon in real life Japan but real life is boring and dull and filled with taxes and pilates and other dull adult stuff so Japanese pop culture went “fuck that shit: Jotaro Kujo” and Banchō are all over their fiction, with the aforementioned Jotaro from JoJo’s Bizarre Adventure being the most well-known:

Why have I told you this? Because Pangoro is a Banchō Panda! Now I hope you can fully appreciate Pangoro. Hopefully you already appreciated the stereotype-busting nature of Pangoro in that instead of a cuddly soft ball of loveable it’s an attack bear and hopefully you already appreciated the fact that there was a panda attack bear that was made of anger and fists that is so badass it naturally grows a badass longcoat and could break an Onyx in half but now you understand that Pangoro isn’t just an ‘ard bastard, it is the ‘ardest of the ‘ard bastards, it is the leader of the ‘ardest bastards. As someone who has been waiting for a Pandamon since Generation 1 I am MORE than satisfied with the end result being Jotaro the Gang Leader Panda.
Pancham I’m a little less enamoured with but that’s mostly from a design point of view, I’m just not that infatuated with the grey body markings, but the little shit is brimming with personality. Lookithim, he’s just a sod and cute too. Oh and you know how they evolve into Pangoro right? You have to have a Dark Type on your team as well to get them to evolve, Panchams become Pangoros because someone was a bad influence! That’s juvenile delinquency theming in its totality and I love it. 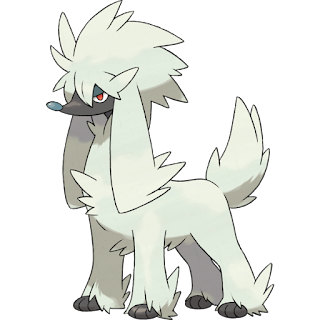 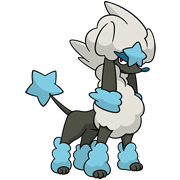 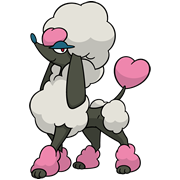 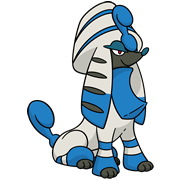 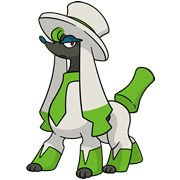 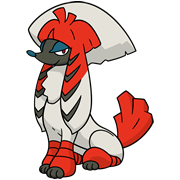 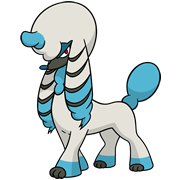 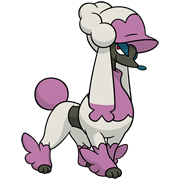 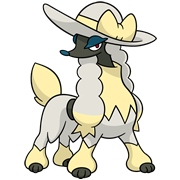 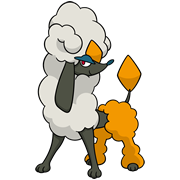 I just wish they’d done more with Furfrou. It’s a nice little Pokémon with a nice little Disney-esque design (it does remind everyone of Oliver and Company right?) and a fun gimmick that fits well with its inspiration (a poodle) and it’s region’s inspiration (France) but it’s ultimately all for nout. You can get 8 different hair styles (Trims) for your Furfrou by visiting different places in Kalos and some of them are rather pleasant – I like the star/blue Star Trim (especially it’s lovely set of blue leg warmers), the green/hat Dandy Trim (I just love it when Poleman combines fur and hats in such a believable ‘hedge sculpture’ way), and the pink/heart Heart Trim (again, nice leg warmers and they folded the heart shapes nice into the design if you ask me, no looking stuck on here) and don’t’ think much of the purple/hat Matron Trim (the hat just isn’t as well worked into the design as I know Pokémon is capable of thanks to things like Murkrow, Mismagius and, y’know, Furfrou) nor the Debutante Trim (same problem) - after five days (real-time) it will revert to it’s base form because hair grows. But this does nothing, with no contests in X & Y what the Pokémon looks like is irrelevant, as it doesn’t’ change typing or states what the Pokémon looks like is irrelevant, as Beauty doesn’t effect it’s evolution (because it doesn’t have one) what the Pokémon looks like is irrelevant, as it doesn’t affect what the Furfrou evolves into (because it doesn’t evolve) what the Pokémon looks like is irrelevant, are you getting my point yet?
I suppose that the two most obvious ideas – changing the type, changing the stats and changing the evolved form it becomes – had all been done before but we are talking about a dog Pokémon and a Normal type here, originality is really not a requirement - but I tell you what would have been new: this is the generation of Mega Evolutions and yet NO Generation 6 Pokémon had Megas in X & Y (the ‘Examplemon’ for Mega Evolution was Lucario) and only one (Diance) got one in ORAS, each form could have given Furfrou a different Mega Evolution form with a different stats/typing! OR! Or or or, maybe it could only learn certain TMs and HMs during the time it has a certain Trim, that’s never been done before (or since). That would have been an Examplemon that would have! Instead it’s just a standard normal type with a standard normal Type movepool and a pretty gimmick that ultimately effects nothing other than how it looks for a very short time. 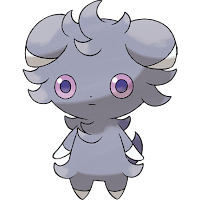 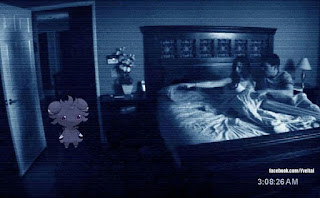 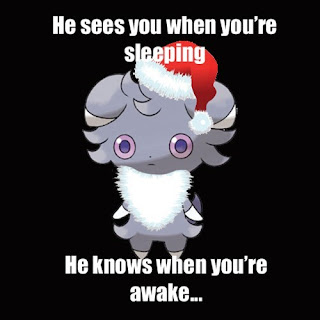 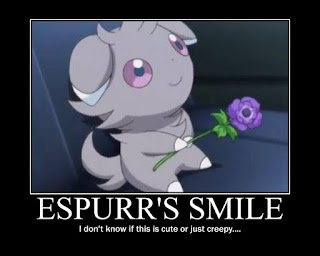 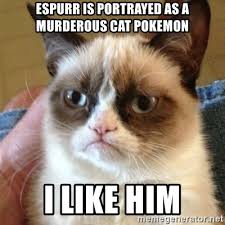 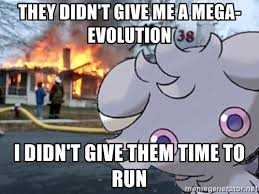 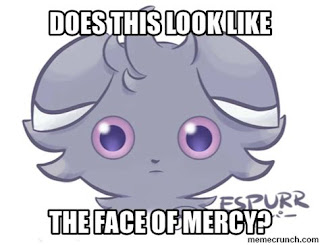 Espurr became a memetic murderer and hero of the internet about 30 seconds after it was revealed, and that’s a conservative estimate - and it deserves every last moment of its success. It’s a lovely, simple little design (I think Bogleech called it a ‘clean design’ and I like that) with some subtle, well placed markings and a lovely simplification and abstraction of a scruffy cat, reducing everything down without turning it into a collection of shapes like Vivillion or making it into a circle with ears like Digimon (I promise to stop ragging on Digimon one day, I LIKE Digimon, Tamers and Tri for the win, but it’s just so easy…) - it’s early-stage Pokémon design and it’s nicest AND it’s not even a ‘expression only design’ – remember I moaned about years ago? Well I did, basically my issue is if you Pokémon looses most of it’s character and uniqueness when it has a different expression to it’s default artwork then you’ve failed at getting across that ‘mons character and uniqueness in it’s design. But Espurr isn’t one of those because that’s what it’s face always looks like, it ALWAYS has those eyes, even when it smiles and it has good reason to – all those jokes about Espurr being a barely constrained murderer are correct, its’s o fucked up because it’s holding back an ability to psychically destroy everything around it by keeping it’s ears folded down. Espurr is tragic and cute and terrifying and wonderful and a precious, PRECIOUS baby and it’s both a relief and a shame when it evolves.
It’s such and bind! (actually I don’t’ think Meowstic can learn Bind) You want the sympathetic, tragic character to find happiness but then it stops being sympathetic and tragic and you don’t like it so much – being a fan is hard, y’all. Meowstic (available in two looks depending on gender) is conceptually Espurr when it’s got it’s shit under control, so it’s a much more confident and a much sleeker, refined design. So I don’t like it as much, but on the other hand Espurr is now ok, so what to do? Meowstic does open it’s ears to reveal the psychic eye(s) and that’s cool but overall I just don’t like ‘em mkuch, they have a less interesting character (cool psychic) and are a bit busier and have a bit to much shit on them (I could do without the tuffs of fur at their hips for a start) but they’re ok, they’re cool for cats, once might say (fnar fnar) and it’s nice to see them giving some thought to the regional cats this time around. 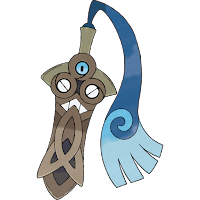 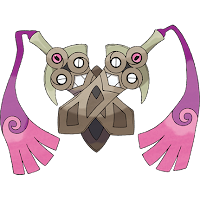 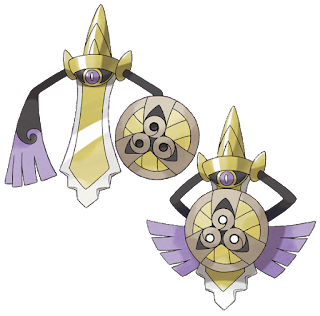 What a line this is. It ends in a fan-favourite ultra-cool Ghost Pokémon but most of it made up of…well:
One of the recurring ‘criticisms’ of Pokémon is ‘they just slapped eyes on X’ – they just slapped eyes on a sandcastle, they just slapped eyes on an ice cream etc etc – and it’s rarely ever true, it’s not actually true for Honedge and Doublade – there’s clearly been a bit of effort put in, a bit of design flare to the pair (ha! Rhymes) but if any Pokémon get close to that it’s Honedge (and by extension Doublade). I think the main problem is that it simply looks too much like a sword, given how detailed and complex video game characters swords get (I’m thinking specifically Final Fantasy) this really doesn’t look like either a living thing or a possessed thing, it just looks I like a sword. I mean it’s clear it has a face on it but it’s all just too subtle and if you get past that subtly all you get is a sword with a face on it. A possessed sword is a great idea for Ghost/Steel type and a pair of crossed swords is a logical evolved form for it but in execution all we get is some of the lazier feeling Pokémon, not the laziest (spoilers, that’s Applin) but still pretty shite.
Then BAM (or I guess, SWOOSH)! Aegishlash baby! Everything that Honedge did wrong, Aegis’ does right, it’s a lovely anthropomorphised sword, looking like a sword, a possessed sword, a knight and a living thing all rolled into one, that’s what I expect from Pokémon. And it has a nifty gimmick; Aegislash has two Formes due to its signature ability Stance Change – in Blade Forme it’s a strong attacker, in Shield Forme it’s a wall, this makes it great for competitive players as it can be used to majorly fuck with your opponent. Not being a competitive player I just like it because I think it’s cool, a sword that uses a shield? Genius.
And yes, these are in Pokémon Sword and Shield.