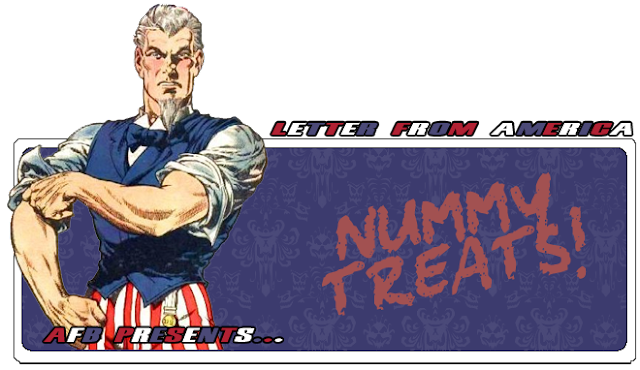 I returned to Orlando, Florida and its theme parks and attractions after 20 years for a holiday. Going to Florida on holiday is a big thing for Britons and requires much saving and lots of effort (and lots of sitting watching whatever Virgin Atlantic put on their little screens). Letter From America is the blog-based fallout from this, we left the day before Hurricane Matthew hit and these posts are not meant in any way as a middle finger to those were killed, injured or even inconvenienced by the hurricane, we at AFB send our deepest sympathies to you all.

One of the things I was determined to do while in America is eat as many America-only snacks as I could. I have a long running affection for British snack food that should show itself on this blog from time to time, it’s kind of a mix of a hobby, an interest and a point of pride so I’m always keen to eat other country’s snack food and see what they have to be proud of. I’m rarely disappointed, even though I firmly believe that Cadbury’s is the best chocolate in the world most local snacks are tasty as fuck and this definitely goes for America. this isn’t the first time I’v ebeen to the USA and eaten all of the snacks but this is the first time I’ve had a blog to tell you about me eating all the snacks so I made sure to take a picture of all the noteworthy crap I shovelled into my body for two weeks so I could bore fictional American readers an Englishman’s view of stuff you see every day and do not think is noteworthy or blogworthy in any way, shape or form. So are you sitting comfortably? Then OOOH YEAH! *smashes through wall* 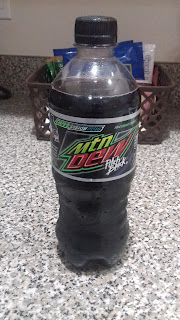 Mountain Dew Pitch Black!
One of the first things I was dying to try, we do have Mountain Dew in the UK (again) but we only get the regular green kind and occasionally Code Red if you go to an import sweet shop, we don’t get Pitch Black and if there was ever a drink that suited me perfectly it’s a jet black pop. I’ve decided that it tastes like a mix of liquorice and Ribena and am sad to admit that I didn’t actually finish either bottle I bought, not because it tastes shit – the unholy pitch black spawn of Bertie Bassett and a Ribena Berry being fucking awesome – but because of the… affect that Mountain Dew has on me, I can’t take a whole bottle of that sort of stimulant. I do want to thank it though for giving me enough of a boost to be vaguely alive on at least two mornings, going to a Halloween Horror Night then a water park the next day? Chug Mountain Dew, you won’t be the least bit tired until lunch. 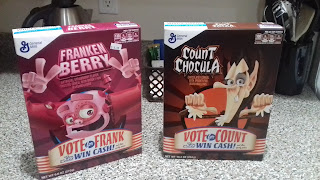 Monster Cereals!
I’m not quite sure what it says about me but one of the best parts of my holiday was being able to eat Count Chocula for breakfast every day. For the non-Americans it tastes like tiny Toffee Crisp bites mixed with shit marshmallows (and milk) and it’s legitimately my favourite cereal. I do get it imported fairly often but due to that being quite expensive I don’t get to eat it like it’s just cereal but rather like it’s a precious non-sustainable resource so being able to just get up, chuck a pile of it in a bowl and woof it down knowing full well I can drive five minutes and buy some more was so, SO satisfying. I bought Franken Berry for the box; I don’t like fruit flavoured cereal, in fact I think it’s a crime against humanity. 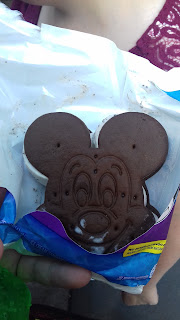 Nestle’s Mickey Mouse Ice Cream Sandwich!
Please ignore the fact that I looks like Mickey has just finished blowing Goofy in an alley off Main Street, I assure you that’s just ice-cream.  Good god these things are addictive and Disney are happy to feel your new addiction at the corner of every walkway, I spent a lot of money on edible mouse heads. As I’m not a connoisseur of ice-cream sandwiches, they’re really not that common in the UK, I can’t say if these are especially good examples of the genre but they are from Nestle so I expect they are pretty high up on the ice-cream sandwich hierarchy, what they are is the perfect blend of tastes and textures for me to want to eat them for every meal, and some days that was what I pretty much did. Also I just need to show you the awesome Halloween soda cups available at Disney parks; I would have this as my wallpaper: 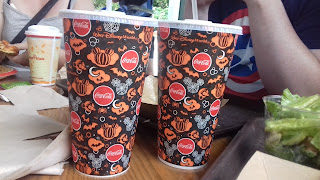 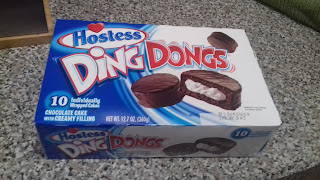 Ding Dongs!
Or as I call them ‘Twinkies for people with taste buds’ – Ding Dongs are superior to those gross processed yellow metaphors for the amount of supernatural activity in New York in every way, live with this fact. These are another thing you can get fairly easily imported and they’re usually available at every convention I go to, which gives me the great pleasure of asking a nice lady ‘can I have a ding dong please?’ – for people who aren’t Leslie Phillips, ‘a ding dong’ is ancient slang for ‘a shag’.  Anyway these were another thing I ate way to many of, but then they’re sold in boxes of 10 and it would just be wasteful to not eat them all, which leads me to this question: why is everything in America sold in such huge quantities? Why are all chocolate bars ‘two to go’ and not just, y’know, one chocolate bar? Why are all drinks sold in 30 gallon bottles? Why do you need this much food in one packet? 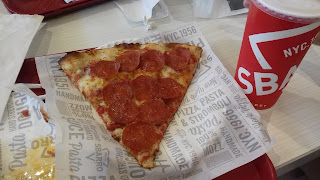 Giant Pizza Slice!
I know these are more associated with places like New York rather than Florida but I wouldn’t have felt like I’d been to America if I hadn’t had a pizza slice the size of a cereal box and thanks to the Florida Mall and a place called Sbarro (which I’m guessing is some kind of chain store that has trouble with the proper use of vowels?) I got my wish; in fact I had two, because I’m a greedy fucker and because these were so tasty. Tasty and as you can see from my beautiful photo taken at the mall itself it was also dripping with grease, it’s nice to see Sbarro is keeping every American food-based stereotype alive. 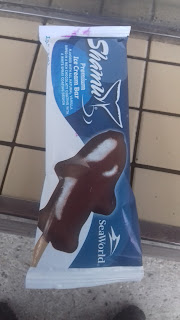 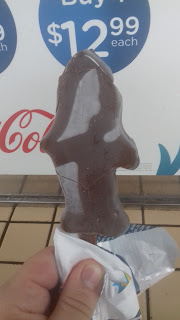 Shamu Premium Ice Cream Bar!
See my previous Letter from America for the moral conflict brought about by visiting SeaWorld but while I was there – and specifically while I was bored because a huge downpour and lightning storm had shut pretty much the whole park – I thought I may as well have probably the best thing about Sea World – choc ices in the shape of a killer whale. I’m fairly easy to please really; if you make something I like in a shape I think is cool I will think it is double awesome. Honestly the ice cream is a bit brittle, not as smooth as I like in my choc ices but the look and the feel of biting it mostly makes up for this, though it is very weird to eat a choc ice off a stick. Sea World, this is as close to a Killer Whale as you should get. 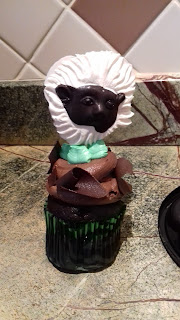 Starbucks’ Cotton Top Tamarin Speciality Cake!
As proven by the above, I’m as fond of park exclusive food as I am of park exclusive merchandise and Starbucks does a bunch of Animal Kingdom exclusive cupcakes, well I say cupcakes – mountains of pure diabetes is a better descriptive really. This thing was fucking evil, delicious but evil, it’s a cupcake, with a pile of fondant that doubles its height, and a chocolate lolly in the shape of a tamarin’s face shoved in the top by its stick. It is a three course meal and all of those courses are chocolate, which sounds like something you’d want until you actually have to eat it, then you realise that death by chocolate is still dying. Anyway the cake was lovely, the fondant was way too much and the lolly was nice, made all the nicer by being sold to me opposite the actual Cotton Top Tamarins, meaning I could stand and make them watch me eat their own face. That’ll teach them to be cuter and funnier than me. 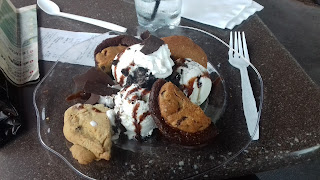 Brookie Sundae!
Right let’s talk about Universal City Walk’s new Toothsome Chocolate Emporium & Savoury Kitchen restaurant please, because it is the best restaurant in the Orlando parks and I’m not saying that for hyperbole or to amuse you, I mean it. In terms of theming, food and especially deserts there no place nicer to eat. It’s a steampunk variant of Willy Wonka’s (I think they originally intended it to be a Willy Wonka restaurant) and is just a great place to sit in, complimented by a delicious menu you really shouldn’t need to eat anywhere else while at the Universal Parks unless you’re severely lactose intolerant.  They even have two walk-around characters including the owner of the factory, the gorgeous Professor Doctor Penelope Tibeaux-Tinker Toothsome who walks around and checks that everyone in ‘her’ restaurant is enjoying herself on a regular basis, Yeah the restaurant has a whole backstory (that you can read here) and it’s all the better for it. The place introduced me to pretzel burgers and brookies, two things that could only exist in America but two things that are utterly delicious, above is their brookie ‘sundae’ (again ‘mountain of diabetes’ is a better term for it) that was fucking gorgeous and just what I needed after having done two parks in one day with a third still to do. A brookie buy the way is a cookie sunk into a circular cupcake shape brownie and is proudly on display at the centre of the Sundae in that shot, they are the shit and I know at least one of my friends agrees with me, don’t you Simone? 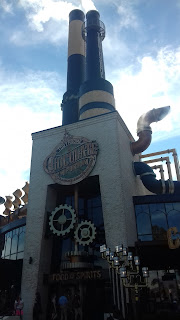 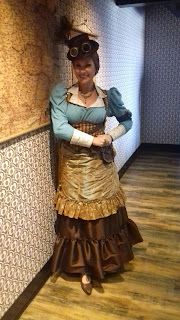 Also this place has the best themed toilets in the Orlando parks, well it’s a tie between these and the ones in Hogsmede that are haunted my Moaning Mertle.

Speaking of Moaning Mertle, I have way to many nummy treats for one post so we'll continue this shit tomorrow k? K.
Posted by dwitefry at 01:48